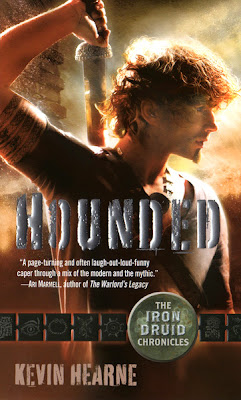 Book 1 of 'The Iron Druid Chronicles'

SYNOPSIS - Atticus O'Sullivan, last of the druids, leaves peacefully in Arizona, running an occult bookshop and shape-shifting in his spare time to hunt with his Irish wolfhound. His neighbors and customers think that this handsome, tattooed Irish dude is about twenty years old - when in actuality, he's twenty-one centuries old. Not to mention: He draws his power from the earth, possesses a sharp wit, and wields and even sharper magical sword known as Fragarach, the Answerer.

Unfortunately, a very angry Celtic god wants that sword, and he's hounded Atticus for centuries. Now the determined deity has tracked him down, and Atticus will need all his power - plus the help of a seductive goddess of death, his vampire and werewolf team of attorneys, a sexy bartender possessed by a Hindu witch, and some good old-fashioned luck of the Irish - to kick some Celtic arse and deliver himself from evil.

EXCERPT - When we got to the park, Oberon was ready to kill just about anything that moved. He'd been trying to intimidate Flidais's stags and found that they were not scared of him in the least, and it was practically making him rabid. I had overheard snatches of their conversation as we rode along in Flidais's chariot:

<If you were not under the goddess's protection, I would have you for supper,> he told them.

<Maybe if you had two score friends or so,> they taunted him. <A single puppy would never trouble us.> Oh ho!

<You would not be so bold if the goddess were not here.>

<Is that so? She leaves us alone for long periods of time, staked to a small area. Try to take us then and see what happens, runt.>

Oberon growled at them and bared his teeth, and I told him to hush, doing my best to hide my amusement. Oh, was he ever mad. Calling a giant like him a runt? They really knew how to push a dog's buttons.

FL Speak - Read the synopsis?? Looks like another Stephenie Meyer novel right? Wrong!! This is an amazing urban fantasy book! I admit, reading about werewolves and vampires made me think twice before picking this up, but boy am so glad I picked it up.

Our druid, Atticus lives in Arizona, runs a shop {which includes making love potions Hogwarts style}, is friends with werewolves and vampires and owns a cool sword.

And now the rest. In all happy tales, a villain has to be there. Presenting Aenghus Og, a Celtic god hell bent on hunting down the Druid for the sword. Atticus has eluded the crafty God for over 21 centuries, but looks like he's running out of places to hide {obviously since in 2100 years, you can live in almost everywhere on this world}.

And yes, Atticus owns a great greyhound and that dog is funny! Atticus can talk to his dog and yes, the dog talks back! For me, the dog, Oberon is the ultimate star!! Hilarious lines, this book is a right mixture of comic timing, one liners, action and thrill. When witches kidnap his dog and his friend, everyone knows why the Druid is rightfully feared.

Fantastic action, myth, folklore, magic all blends into one awesome tale, Hounded is the beginning of what promises to be one memorable ride! The reference to the mighty Thor as a prick makes me laugh every single time. In the meantime, he finds an apprentice for himself, makes love to a goddess, desecrates faes sent against time while managing time to make tea for his customers in the shop.

Kevin Hearne has started a laugh-out-loud urban fantasy tale and we are all in for the rest of the ride.

The only drawback I could find was that it ended in only 289 pages :(