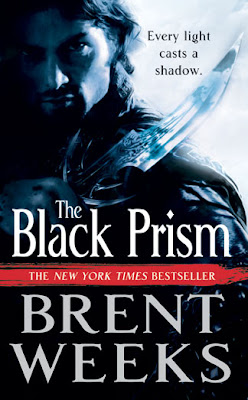 SYNOPSIS - Guile is the Prism, the most powerful man in the world. He is the high priest and emperor, a man whose power, wit and charm are all that preserves a tenuous peace. Yet Prisms never last, and Guile knows exactly how long he has left to live.

But when Guile discovers he has a son, born in a far kingdom after the war that put him in power, he must decide how much he's willing to pay to protect a secret that could tear his world apart.

EXCERPT - It wasn't until two days later, as Kip and Liv came within sight of King Garadul's army , plopped over the plain and fouling the river like an enormous cow pie, that he realized how deeply, incredibly, brilliantly stupid his plan was.

I'm going to march in there and rescue Karris?

At the top of a small hill, they sat on the horse, which seemed grateful for the break, then scanned the mass of humanity before them. It was immense. Kip had never tried to estimate a crowd, and never seen on this large.

"What do you think, sixty or seventy thousand?" he asked Liv.

"How are we going to find Karris in that?" he asked. What did I expect? A sign, perhaps? "Captured drafter here"?
FL Speaks - People have been recommending Brent Weeks for ages and finally I decided to pick him up. Although this was not the book they were recommending, I'm pleased that I brought this.

Gavin Guile is the Prism. {Yes, I did a double-take too, but apparently Prisms are rulers. I know you thought about the prisms you studied in physics. Oh wait for the shocker}

The people of the Seven Satrapies are ruled by the Prism. The people of the land have the ability to see and split colors. Some people can split only one particular color and use it for their work. Others called polychromats can split two or more colors. Still confused? Let me explain. A man sees the sunlight reflected off various surfaces. If he can see one color more than the other, he can split that color with his eyes and use it for various purposes. He can create an object just by splitting the light. And, a Prism can split all the seven colors.

Kip lives in the town of Rekton. His life is turned upside down when King Garadul's army ravages his town and only Kip survives. Gavin and Karris are off on their mission when they see Kip surrounded by the enemy. Gavin rescues the boy and later realizes that he's his bastard.

Prism's have a low life span. In multitudes of 7 years, in correspondence to the seven colors. Gavin's brother, Dazen also proclaimed himself as the Prism and that led to war. In the end, Gavin defeated his evil brother but couldn't bring himself to kill him and imprisoned him in a cell nobody knew about. I was cheering for Gavin and then came the shocker. Gavin guile is not Gavin. Dazen is impersonating as Gavin all these years while the original Gavin is still imprisoned.

Contrary to everyone's belief, the original Gavin is not so noble as everyone expected. And Dazen, after his rebellious war against his brother, is actually turning out to be a better man. Things gets complicated when his once allies, rises against the Prism and war is ensured. Kip and Liv are trapped behind enemy lines trying to rescue Karris, the love interest of both Gavin and Dazen and things turn from bad to worse when the fanatics send an assassin to kill Gavin.

The magic system created is fantastic. You'll immediately understand the way light and color works and yet marvel at the possibilities Brent Weeks created. This is shaping out to be one great fantasy series and I admit I simply cannot wait for the next book which will be released later this year. The characters are instantly loveable. Kip is brilliant with his one-liners while Gavin is the charming, carefree, immensely powerful ruler for whom boundaries and limits do not exist.

A good book. Infact, a great book. The ability to create luxins which can shape and make items by splitting of colors was the clincher for me. And to top it all, Brent Weeks has provided with the advantages and disadvantages of all the colors. Colors like red are extremely volatile and hence can we used to make ammunitions. Superviolet is invisible and can be used to transmit messages. Yellow is sturdy and used to build. Hats off to Brent Weeks for taking a simple concept and turning it to an excellent piece of magic system.