Behenji - A Political Biography of Mayawati 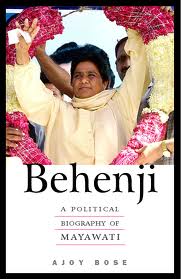 UCV says: A book like this would never have found its way to my book shelf had my father-in-law not been clearing up his, and relieving it of some unworthy weight. Not that this book is unworthy, but it is definitely not a keepsake. It is no more than what it claims to be – a forthright political biography of Mayawati. Why I chose to read it? Because, doesn’t this juggernaut of a woman make one curious?

So Ajoy Bose, a seasoned journalist, ventures to write about the political life of this firebrand Dalit leader whose political overtures have generated frenetic media coverage over the past decade. Bose mentions in his introduction how the book took a long time coming, and how his friends and associates had scoffed at the idea of a book on Mayawati, who was looked down upon at the beginning of her career. But the book came to fruition around the time of Mayawati’s meteoric rise as a politician, and the author’s doubters shut up as did the politician’s detractors.
Bose begins his account with Mayawati’s humble beginnings in a slum – a shy, young girl from the lowly Chamar caste, whose greatest aspiration in life is to become an IAS officer. She believes, like all those belonging to the educated lower caste, that an IAS is the only way to social salvation. Though not brilliant, Mayawati chases the IAS dream with sheer hard work and determination. She is a young government school teacher with a law degree studying for her IAS exams on a winter night, when her life changes forever with the entry of her to-be mentor, Kanshi Ram.
After offering some background, Bose introduces us to the BAMCEF founder Kanshi Ram. He describes Ram as part ambitious leader and part visionary, who with his ability to forge alliances, moves rapidly up to power ladder. Ram sees in Mayawati an unlikely Dalit leader and thus begins that fiery relationship between mentor-protégé, which was the subject of much speculation.
The author documents the birth of the BSP, its political travails through the 90s, its many contradictory coalitions with political parties in a bid for power, and its coming of age as a major player in national politics. He records the BSP’s, especially Mayawati’s tussle with the Kalyan Singhs and Mulayam Singhs of UP’s Jungle Raj, the politician’s sometimes cunning and often brazen political ways, her astounding canvassing skills, and her single minded persuasion of the throne of UP. He mentions many an episode that showcase Mayawati’s exemplary courage as a Dalit and more so a woman in the oft-cruel male dominion of politics. While Bose tries hard to maintain his objective, journalistic stance, it is clear to see that he admires the woman. But that couldn’t get clearer than from the fact that he chose to write her biography. And that too at a time, when she wasn’t heralded as the country’s next possible prime minister.
Despite her obscene display of wealth and power, it is hard not to admire Mayawati’s guts of steel. It is hard not to notice that even after Kanshi Ram passed away, she has borne the Dalit cause with vigour. It is harder still to not applaud her inverting of the caste pyramid by offering ‘protection’ to the Brahmins. Love her or hate her, the story of the making of Behenji is truly a remarkable one.
Rating: 3/5
Posted by Urmi Chanda Vaz at March 31, 2012
Email ThisBlogThis!Share to TwitterShare to FacebookShare to Pinterest
Labels: Ajoy Bose, biography, UCV