The Ascetic of Desire 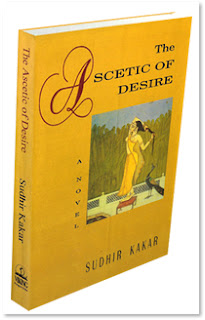 Because I’ve read a fair number of works on historical fiction recently, the genre no longer amazes me. However, my respect for authors who create such works continues to accrue, and a secret ambition of authoring such a book one day builds steadily. I was first acquainted with historical fiction with Devdutt Pattnaik’s ‘The Pregnant King’ and have, since, gone on to acquire several such books – based mostly on the ‘Mahabharat’.  During one such crazy book-buying spree, I chanced upon Sudhir Kakar’s ‘The Ascetic of Desire’. If the title wasn’t interesting enough, the blurb, which informed me that the book was based on the ‘Kamasutra’, surely was. Kakar's choice of subject is intriguing, not just because the book is about the Kamasutra, but also about its elusive writer, who, apparently, was celibate. Besides, Kakar’s renown as a psychoanalyst connected with my Clinical Psychology background.
Going by the reviews, or the lack of them, on the web, I suppose it is not a very talked-about or known book. And it’s easy to see why. One, Kakar isn’t really the most gifted of writers, and two, the inhibitions inherent among Indians, when it comes to matters sexual. Or perhaps, Kakar didn’t have a good publicist; the success of books these days seems to depend more on advertising than on literary merit. Whatever the reason, ‘The Ascetic of Desire’ has not earned as many readers as it should perhaps have.
When I say Kakar isn’t a great writer, I do not mean he reads badly. It is tough to lay a finger on his flaws because there aren’t any. It is the lack of fluidity, of ease that keeps reminding the reader that what he is reading is a work of imagination. Its contrast is especially stark, when compared to a phenomenal work of historic fiction like ‘My Name is Red’ (which I had read immediately before Kakar’s work). While Pamuk’s work is convincing, down to the last (often unnecessary) detail, Kakar’s is contrived. One can see the effort the author puts into describing the surroundings, and his characters, in an attempt the make them seem 5th century.
The book is based on the little known life of Kamasutra’s author, Vatsyayana. Kakar assumes the voice of the protagonist – a young Brahmin scholar and biographer ofVatsayana – to tell Vatsyayana’s story. Using partly historical facts and partly his imagination, the author constructs the life of the author of the famous sexual treatise.Peppered with ample summaries from the Kamasutra, commentaries on the sexual and social mores of the olden societies, and relationship triangles, the book makes for an interesting read. The book affirms that ancient India was a much more liberal society as far as sex was concerned. The position of women in general, and prostitutes in particular, is elucidated in the book. Through the central characters of the famous courtesan, Chandrika (Vatsyayana’s aunt), and Malavika (Vatsyayana’s wife, who has an affair with his biographer), the writer explains the various aspects of women’s and men’s sexuality. His expertise as a psychoanalyst is used often to comment upon the emotional aspects of physical dalliances.
While the book is interesting while it lasts, offering information as well as sophisticated titillation in equal measure, it is not something that would stay with the reader. Read it if ancient scriptures, including the Kamasutra, interest you like they do me. If nothing, it’ll enhance your, ahem, knowledge.
Verdict: 3/5
Posted by Urmi Chanda Vaz at March 11, 2012
Email ThisBlogThis!Share to TwitterShare to FacebookShare to Pinterest
Labels: Historical Fiction, UCV