The Witness For The Prosecution- Agatha Christie 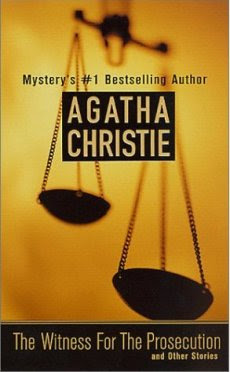 NAME OF THE BOOK: Witness for the Prosecution and Other Stories

#A murder trial takes a diabolical turn when the wife of the accused takes the stand...

#A woman's sixth sense- and a loaded revolver- signal premonitions of doom...

#A stranded motorist seeks refuge in a remote mansion, and is greeted with a dire warning...

#Detective Hercule Poirot faces his greatest challenge when his services are enlisted- by the victim- in a bizarre locked room murder.

From the stunning title story (which inspired the classic film thriller) to the rarest gems in detective fiction, these 11 tales of baffling crime and brilliant deduction showcase Agatha Christie at her dazzling best.

He went slowly back into his room and shut the door. He stood by the bed lost in thought. And then he started-

The mahogany table by the bed was smothered in dust. Written in the dust were three letters, clearly visible. S.O.S.

In this marvelous compilation of short stories by the Queen of Crime, you'll find yourself treated to about a dozen different tales of murder and mystery; some even with an element of the supernatural-

*The Witness for the Prosecution
* The Red Signal
*The Fourth Man
*S.O.S.
*Where there's a Will
*The Mystery of the Blue Jar
*Sing a Song of Sixpence
*Mystery of the Spanish Shawl
*Philomel Cottage
*Accident
*The Second Gong

I was actually drawn to this particular book due to the titles of the various stories in the contents. As it turned out, the ones with the most interesting titles seemed to be the best. While some might be a little disappointing, and a few have a rather odd ending, the rest make this a book that one will sincerely treasure. It's difficult to choose the 'best'- it perhaps depends on the liking of the reader. I, being someone who loves reading about anything out of the ordinary, enjoyed the stories which revolve around the supernatural.

S.O.S. was one of my favorites. On a rainy night, just as a family sits down to the evening meal, a stranger comes calling, looking for shelter. As Mortimer Cleveland notices the strange behavior of the different members of the family, he realizes that there's much more to the family's decision to live in seclusion than the father admits.

In The Witness for the Prosecution, Leonard Vole is arrested for the murder of Ms. Emily French, a rich old lady who made him her beneficiary. When his wife, who leaves his lawyer at a loss for words with her contradictory statements, acts as a witness for the prosecution things turn downhill. A completely unexpected ending will leave you shocked.

The Second Gong has none other than Hercule Poirot as the investigator, and is one of those locked room murder mysteries that Agatha Christie is famous for.

The Mystery of the Spanish Shawl was a rather strange story which did seem to be quite different from anything expected. Mr Eastwood, a writer, was struggling with his next murder mystery when he got a call from a seductive female voice on the phone, asking him to come to a secret place- and he found himself accused of murder. It sounded promising at first but the end was not as good as I thought it would be.

The most impressive short stories are Where there's a Will and Philomel Cottage. I can honestly say that both of them would be a pleasure to watch enacted on stage. The first has a wealthy old woman living with her nephew who brings her a radio for entertainment. But she finds herself hearing strange messages through it- from her dead husband!

In Philomel Cottage, Alix King ditches Dick Windyford to marry another man, despite having been engaged to him for years, because he refused to marry her until he could be sure that he could financially support both of them. However, when she makes a chilling discovery about her new husband Alix is left terrified for her life.

The skill with which Agatha Christie goes about the plot is- unsurprisingly- remarkable. The name of the author itself is enough to tell you how good this book would be. A must read for anyone who enjoys thrillers.