The Way of Kings - Brandon Sanderson 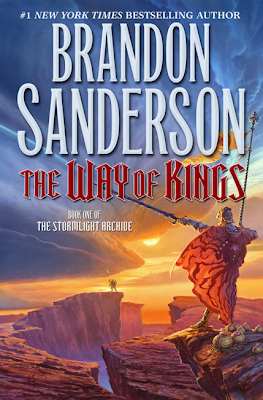 THE WAY OF KINGS

Book 1 of 'The Stormlight Archive'

SYNOPSIS - I long for the days before the Last Desolation. Before the Heralds abandoned us and the Knights Radiant turned against us. When there was still magic in Roshar and honor in the hearts of men.

In the end, not war but victory proved the greatest test. Did our foes see that the harder they fought, the fiercer our resistance? Fire and hammer forge a sword; time and neglect rust it away. So we won the world, yet lost it.

Now there are four whom we watch: the surgeon, forced to forsake healing and fight in the most brutal war of our time; the assassin, who weeps as he kills; the liar, who wears her scholar's mantle over a thief's heart; and the prince, whose eyes open to the ancient past as his thirst for battle wanes.

EXCERPT - "What do we tell the people, Jezrien?" Kalak asked. "What will they say of this day?"

"Its simple," Jezrien said, walking away. "We tell them that they finally won. Its an easy enough lie. Who knows? Maybe it will turn out to be true."

Kalak watched Jezrien depart across the burned landscape. Finally, he summoned his own Blade and slammed it into the stone beside the other eight. He turned and walked in the direction opposite from Jezrien.

And yet, he couldn't help glancing back at the ring of swords and the single open spot. The place where the tenth sword should have gone.

The one of them who was lost. The one they had abandoned.

Forgive us, kalak thought and left.

FL Speak - Phenomenal. When it comes to Brandon Sanderson, one thing that comes to mind is that the book is going to be epic!!! The creator of Mistborn has come up with a new epic series 'The Stormlight Archive' and book 1 completely bowls you over. Sanderson has this unique ability of creating intricate magical systems (we saw them at Mistborn, Elantris, Warbreaker) and brilliant writing which confirms that fantasy is indeed in safe hands for another couple of decades.

The Way of Kings starts of with an assassination of the greatest King by a Shardbearer. A Shardbearer is one who uses Stormlight to move faster, use lashings (that you will learn about when you read the book, and I promise its awesome). A shardbearer also has the use of a Shardblade, a sword which appears out of mist in 10 heartbeats and can cut through any metal.

Five years later, the King's heir is still fighting against the Parshendi who hired the assassin in the Shattered Plains. The whole kingdom is at war and no one seems to be winning, but the promise of vengeance lets them continue on.

Kaladin, a young surgeon turned into a soldier before being branded into a slave fights to save his fellow slave comrades from dying in the war. As his group is made prey for the enemy so that soldiers may survive, Kaladin takes it upon him to do the only thing he can, fight back. Little did he know, the Gods have something else planned for him.

Shallan, a young girl, travels around the world to be the ward of Jasnah Kohlin, the most famous scholar and heretic, sister to the King. But her motives are less than pure as she prepares herself to perform the ultimate betrayal.

Dalinar Kholin, brother of the deceased King, loses his interest in the waging war. During highstorms, he is visited by visions of a time long ago, when the Knights Radiant still fought for mankind against the Voidbringers.

And finally, the killer who murdered the King, is back 5 years later, with a new bold and frightening mission.

The finale is explosive as sudden twists expose lies and betrayals at the highest levels. This is a MUST READ. HIGHLY RECOMMENDED.

Brandon Sanderson is one of the finest writers to have emerged in recent years. And I believe this series will be one of the greatest in times to come. Can't wait for the next one, knowing it is a 10-book series !!
Speak again the hallowed oaths :
Life before death.
Strength before weakness.
Journey before destination.
The Knights Radiant must stand again.
My Rating - 5 stars