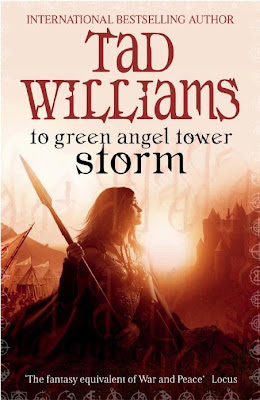 SYNOPSIS - In Part 2, Simon and Miriamele undertake a dangerous quest through the war - and magic - tornlands, even as the call to battle goes out to all who would stand against the Storm King's seemingly unstoppable evil. It is a summons that will lead the valiant followers of Josua Lackhand across storm-tossed seas brimming with bloodthirsty kilpa...through forests swarming with those both mind-and soul-lost...through ancient caverns built by the legendary Dwarrows...to the haunted halls of Asu'a itself...the Sithi's greatest stronghold!

EXCERPT - "What have we here?" a voice said. "A trespasser?"

Simon could not yank himself free. His heart sped so swiftly that he though he could die of fear. He was pulled slowly back onto his feet, then tugged around the chair until he could look into the pale face that gazed at him from its shadows. The eyes that met him were almost invisible, faint smears of reflected light that nevertheless seemed to hold him just as strongly as the bony hand on his wrist.

"What have we here?" his captor repeated, and leaned forward to stare at him.

It was King Elias.

After months of running, the battered but resilient forces of good are finally ready to take on the evil. The call of battle is at hand and the Sithi, the trolls and humans team up to face an undead foe.

Part 2 of Book 3 has everything you wished for. As Simon and Miri whisks away into the darkness, the Norns send assasins to Josua's camp. The Norns fail but they and a terrible blow, with the death of Geloe.

Miriamelle is one of the most irritating girls I've ever read about. First, she whines and rebels, then she charms poor Simon away, third she wants to be coochy-cooey with Simon but tells him that she's not a maiden and pushes him away and after all that drama, she realizes she's in love. Duh! Even I knew that!

Josua and his ragged army seize Nabban, while their allies, the Sithi, take control of Naglimund. Little did they know they were being herded like sheep before the slaughter. As the reach the stronghold of King Elias, the Norn queen plays her ace. The three swords that were supposed to bring doom to the Storm King did a double turn.

Adventure, magic and bravery. This book is breaming with all the three. Some tragic sacrifices, some great victories all lead to the final showdown which would be the final stand. The last battle for the survival of humankind and Tad Williams pens down a scorcher of a finale.

Immense respect for Mr.Williams. This trilogy goes straight to my favorites alongside LOTR and Mistborn. The tale of Simon, scullion boy/wielder of Minneyar/heir of The League of Scroll/brother to the trolls/friend of the Sithi/dragon killer is finally at end.