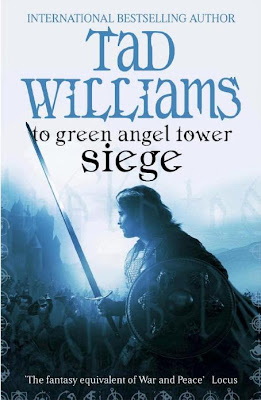 Part 1 of Book 3 of 'Memory, Sorrow and Thorn'
Read about the previous parts HERE
ISBN - 978-0-88677-598-8FIRST PUBLISHED - 1993PAGES - 815BINDING - PaperbackGENRE - FantasyAUTHOR - Tad WilliamsBEST-SELLERS - Otherworld, Shadowmarch, The Dragonbone ChairSYNOPSIS - The evil minions of the undead King Sithi Storm King are beginning their final preparations for the kingdom-shattering culmination of their dark sorceries, drawing King ever deeper into their nightmarish, spell-spun world.As the Storm King's power grows and the boundaries of time begin to blur, the loyal allies of Prince Joshua struggle to rally their forces at the Stone of Farewell. There, too, Simon and the surviving members of the League of the Scroll have gathered for a desperate attempt to unravel mysteries from the forgotten past. For if the League can reclaim these age-old secrets of magic long-buried beneath the dusts of time, they may be able to reveal to Joshua and his army the only means of striking down the unslayable foe...EXCERPT - "Look!" Simon said, startled. "That's no cookfire!" He pointed to a large, moving billow orange-red flame near the middle of the encampment. "Someone's tent is on fire!""I hope no harm comes to them, but atleast it will keep people busy till we are away," said Miriamele grimly. "We must ride, Simon"Suiting action to words, she clambered deftly into the saddle - she was once more wearing the breeches and shirt of a man beneath her heavy cloak - and led them down the hill's far side. He took one last look at the lights, then urged Homefinder after her, into shadows that even the emergent moon could not pierce.FL Speak - Due to sheer size of the book, book 3 had to be split into 2 for paperbacks. Part 1 picks up where the last book ended with the long lost famous knight Sir Camaris now found alive.The Sithi finally ride to battle. They finally decide to take up arms against their brothers as they travel to Lady Maegwin's aid. Miriamele flees the ship with Cadrach with the help of the nixie. Aditu, gives an appearnace to Simon as he intoduces the Sithi to Joshu. Meanwhile, King Elias has sent Fengbald with an army to destroy Joshua once and for all. But at the time of greatest despair, an ally came. The dwarves have arrived and together they kill Fengbald at what will be known as the first battle for freedom. When Miriamelle and Camaris arrive, Joshua is faced with the decision of moving towards Nabban to free the kingdom or move towards the Hayholt to gather the remaining swords.The Norns are planning an attack on Joshua as the unsuspected group of travelers move towards Nabban. Breath-taking pace. Finally the good guys are on the offensive. Tad Williams epic saga is coming to an end. The adventure is almost over. The final battle is almost upon them and our heroes are not as much prepared as they hoped to be.My Rating - 4 stars