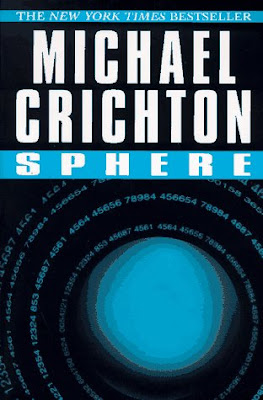 SPHERE By MICHAEL CRICHTON
GENRE: Science Fiction/Techno thriller
SYNOPSIS:
The novel follows Norman Johnson as a psychologist who is engaged by the united States Navy to join a team of scientists assembled by the U.S Government to examine an enormous space craft discovered at the bottom of the Pacific Ocean. The depth of coral covering the craft suggests that it has been lying there for over 300 years and so could only be of alien origin.
The novel begins as a science fiction story but quickly transforms into a psychological thriller, ultimately exploring the nature of the human imagination
Chandana Speaks:
Michael Crichton is one of my favorite novelists and I have literally devoured every book of his. Right from Jurassic Park series, to Prey to Andromeda strain. I must have read every book at least twice and never got bored of it.
Sphere, has an equally captivating and chilling storyline – which was made into  a lousy movie, but we all know that right? Books are always way better than their movie counterparts.
So the story!
The spacecraft that they think is of alien origin, turns out to be an American spacecraft constructed 50 years in the future and apparently sent through time, crashing 350 years before its creation. On further exploration, the team discovers a mysterious spherical artifact, clearly of extraterrestrial origin, which quickly becomes the focus of their attention. At this point a Pacific storm traps the scientists on the ocean floor without contact or support from the Navy on the surface for over a week.
The crew soon focuses on attempting to open the sphere and learn about it. Harry eventually succeeds in going inside it. Upon returning, he has a terrible headache and he remembers little about what happened inside or how he opened it.
As they continue to theorize, they are contacted by an intelligent, seemingly friendly life form which calls itself Jerry, from within the sphere. While they struggle to communicate with it and translate its coded language, bizarre things start to happen. Sea creatures that never even existed start to appear.Jerry tells them he is "manifesting" the creatures. Members of the team start to die in various attacks by sea life and a new form of giant squid, and the dwindling survivors struggle to placate the unthinkably powerful, childlike, and temperamental Jerry.
The rest of the story revolves around how they discover who Jerry is and how they escape from the submarine to the surface.
The novel lives up to its expectations. The good thing is that it keeps you going even when you are pretty sure of what will happen next!
PRICE: INR 434/- (Flipkart price)
RATING: 4/5