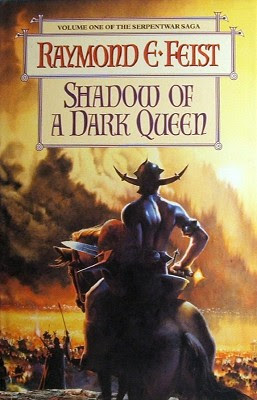 SHADOW OF A DARK QUEEN

Book 1 of 'The Serpentwar Saga'

SYNOPSIS - A dread darkness is descending upon a great land called Midkemia - a powerful and malevolent race of monsters that has slipped through a hole in the dimensions. And two unlikely young heroes - a bastard heir denied his birthright and an irrepressible scoundrel with a penchant for thievery - must take up arms in the struggle to protect their besieged world; two friends chosen by Destiny to stand at the fore of the battle that is to come against the gargantuan reptile army of the terrible Emerald Queen.

EXCERPT - The two soldiers motioned for the prisoners to fall in and quick-marched them out of sight. As they vanished, Foster looked at de Loungville and said, "I think its starting to work, Bobby."

De Loungville scratched his chin as he pondered. "I don't know. We'll see. But it had better. We're going south short-handed and I'd hate to have to hang this lot the day before we sail."

Foster said, "If Billy Goodwin didn't cut my throat for calling his mother a whore-she was, but he's tpuchy about it-then I think he's learning. And the way they stuck up for him."

De Loungville nodded. "Maybe you're right. Or maybe they're being clever. We'll have to see, won't we?"

Without waiting for an answer, he turned and headed back to the command building.

FL Speaks - Raymond E. Feist returns with yet another fantasy series in the world of Midkemia. The following takes place 50 years after the great battle of the 'Riftwar Saga'. And I am cursing myself for not yet completing that series.

Eric is a bastard son of the Duke of Darkmoor. Denied of his birthright, he lives with his mother in a distant locality of the region of Darkmoor. When the Duke and his half brothers arrive, Eric and his friend Roo are forced to kill one of his half-brothers after watching him rape a girl.

Chased by the kingdom, Roo and Eric flee to the city of Krondor before finally being captured and sentenced to hang. But fate has something much more terrible for the duo. In a mummer's farce, they both are spared their lives by the acting King and given a choice to go to war against an enemy never defeated before. Unsure of the future, but lucky to have their lives extended, Eric, Roo and a few others train to be mercenaries led by the son of Tomas {if you remember the Riftwar Saga, or if you even read my reviews :P} into a distant kingdom. Because of they fail, the whole world will return to the dark ages.

Calis, son of Tomas comes up with a wild plan of joining the enemy to learn their secrets while Miranda, a sorcerer, is chasing after the elusive grand wizard, Pug. Amidst the enemy, the brave souls gather intelligence but are soon chased by the Saaur's {those huge reptilian snake-like enemies} as they prepare to flee.

A striking tale of friendship, adventure, war and magic which tests the loyalties of men and those around them. Eric and Roo, condemned to death find friends among other murderous kin as the ragged band of low-lives becomes one of the most disciplined mercenaries under the, Eagle of Krondor, Calis.

The Serpent Queen's ever-growing army marches on towards the Kingdom and Callis and his crew rejoin the enemy under the guise of a different mercenary band to postpone the inevitable madness and give time to Pug and the kingdom to come up with a defense. In the chaos that ensures, the team is split up as a few find their way to safety while the rest are stuck behind enemy lines.

If you thought the Riftwar Saga was great, wait till you read this. I might be over-reaching, considering this is the 1st book of 4, but then again, if the beginning is great, my expectations tend to increase tenfold.