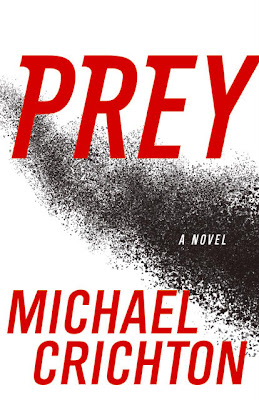 PREY by Michael Crichton
GENRE: Science Fiction
SYNOPSIS:
In the Nevada desert, an experiment has gone horribly wrong. A cloud of nanoparticles – micro-robots – has escaped from a laboratory. This cloud is self-sustaining and self-reproducing. It is intelligent and learns from experience. For all practical purposes, it is alive.
It has been programmed as a predator. It is evolving swiftly, becoming more deadly with each passing hour. Every attempt to destroy it has failed.
And we are its Prey.
Chandana speaks:
Jack Forman is an unemployed software programmer who was fired from his previous job when he discovered an internal scandal. As a result he takes the role of a stay at home husband while his wife Julia serves as a high ranking employee at a nanorobotics company. Julia claims that she is working on a new piece of revolutionary imaging technology with her company, which takes up most of her time. He starts believing that during her long hours away from home she is having an affair, and becomes watchful of her changes.
One night Julia comes home late and shows Jack a video of her demoing the Xymos nanobots. In the video, the nanobots are put into a human test subject, and video from inside the body is broadcast in real time. The next day, Julia is in a car accident, and Jack is offered a job by Xymos, because the project manager, Ricky, is having software issues with the nanobots.
Jack is taken to the Xymos research facility in the desert. Jack is given a tour of the lab and meets the programming team. Ricky claims that hazardous elements such as the assemblers, the bacteria, and the nanobots were blown into the desert, which evolved and eventually formed the "swarms". These swarms start attacking and killing animals in the wild. Most alarmingly, the swarms seem to possess the ability to quickly learn and to innovate. The swarms tend to wander around the plant during the day but quickly leave when strong winds blow or night falls.
Jack goes outside to inspect a dead rabbit killed by the swarm and they find that the rabbit died of suffocation resulting from the nanobots blocking its bronchial tubes. Jack is attacked by the swarm and he barely manages to get through the airlock inside the lab before falling unconscious
The team proceeds to find and destroy these nanobots. After multiple escapes with death Jack discovers that somewhere among them is the person who let them out in the first place and someone among them is the one who has infected everyone else with the swarm. The rest of the story revolves around how they try to destroy this new strain.
Drawing on up-to-the-minute scientific fact, Prey takes us into the emerging realms of nanotechnology and artificial distributed intelligence in a story of breathtaking suspense. Prey is a novel you can't put down.
Because time is running out.
PRICE: INR 214/- (Flipkart price)
RATING: 4/5
Posted by Chandana at February 12, 2012
Email ThisBlogThis!Share to TwitterShare to FacebookShare to Pinterest
Labels: Chandana, Michael Crichton, science fiction