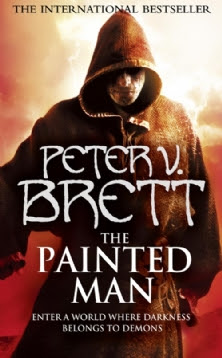 SYNOPSIS - Arlen lives with his parents on their small farmstead, half a day's ride from the isolated hamlet of Tibbet's Brook. As dusk falls every evening, a mist rises from the grounf promising death to any foolish enough to brave the coming darkness. For hungry demons materialize from the vapours to feed, and as the shadows lengthen , humanity is forced to take shelter behind magical wards and pray that their protection holds until the dawn.

But when Arlen's world is shattered by the demon plague, he realizes that it is fear, rather than the monsters, which truly cripples humanity. Only by conquering their own terror can they ever hope to defeat the demons. Now Arlen must risk leaving the safety of his wards to discover a different path, and offer humanity, a last, fleeting chance of survival.

EXCERPT - Rojer was up in an instant, grabbing her up and thrusting her behind him. He brandished the stick before him like a spear, his face twisted in a snarl.

The man ignored them both, moving over to inspect Rojer's circle. 'You have holes in your net there, there and there,' he said, pointing, 'and this,' he kicked the ground by one of the crude symbols, 'this isn't even a ward.'

'Can you fix it?' Leesha asked hopefully, pulling free from Rojer's grasp and moving towards the man.

'Leesha, no,' Rojer whispered urgently, but she ignored him.

The man didn't even glance her way. 'There's no time,' he replied, pointing to the corelings already beginning to rise at the edge of the clearing.

'Oh, no,' Leesha whimpered, her face draining of colour.

The first to solidify was a wind demon.

FL Speak - The cover says, "enter a world where darkness belongs to demons". Now we ALL know that! I was expecting just amother typical Robert Jordan-types plot when Peter V. Brett blew me away.

This is the tale of Arlen. Every night demons rise from the ground as the sun sets and the people rush indoors hoping that the wards will not fail them. Every night people die. After seeing his mother murdered by the corelings one night and realizing that his father is a coward, Arlen runs away to the Free Cities in hopes of learning better wards.

After years of training to be a Messenger, someone who travels the world, facing every night alone with only their wards and wits to keep them alive, Arlen realizes that the wards of the old times may not be lost as everyone believed. He goes hunting for those wards which might help humankind to fight back the corelings!

This is also the tale of Leesha, a young girl who becomes a Herb gatherer (local medic) for the people and how her paths cross with Arlen later into the story. Rojer, who wants to be a Jongluer (a juggler/entertainer) relives his painful memories of the night his parents were killed by the corelings and plays a fiddle that manages to hold the corelings at bay.

As Arlen leaves his training and runs away to the Krasian desert where men has always fought the corelings, he realizes that for the first time, men can win. But treachery and betrayal at the hands of his friends changes the man inside him. Arlen survives, but he's now changed into someone else.

The Painted Man rides alone killing demons every night until he meets Roger and Leesha and together for the first time, they make the people of a small hamlet come out of their fear and fight for their lives.
The great thing about this book is that it takes a simple story to an extraordinary tale. The characters are immensely loveable. You end up wishing you were Arlen, fighting demons, running away from love.
Not an original storyline, but a total original story! Peter V. Brett takes you on a ride that makes you impossible to pause reading. Not much background details and that may shear off some points for being a fantasy novel, but the fast paced tale of guts and glory makes you wish the story never ended.