My Name is Red 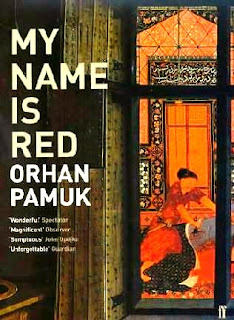 This last day of February, I risked getting late to work. I walked around the house frenetically, preparing my bath things, putting out my clothes, bumping into furniture, eyeing the clock, panicking, yet continuing to read the last few pages of Orhan Pamuk's multiple literary award-winning novel, 'My Name is Red'. It had to be finished today because I started reading this damned book in the beginning of January! When I say 'damned', I mean eloquent, I mean grandiose, I mean grandiloquent, and I mean all of those fancy adjectives. Even so, had I taken any longer than two months to finish it, I would have to shamefully walk around with a brown paper bag over my head.

It should not take two months to finish, but 'My Name is Red' is by no means an easy book. It is an exotic thriller, a study in language and a smallish history of Islamic art, all at the same time. Sometimes one loses patience, when Pamuk takes his time to weave into the plot minor stories from Islamic folklore and literature, but he is almost immediately forgiven for the wealth of knowledge and beauty flowing from his pen. These micro story clusters, usually in threes, are chewy, sweet, though not entirely indispensable. Pamuk uses these tales of shahs and pashas, artists and miniaturists, dervishes and lovers in the old school style of fables, richly texturing his plot. Every word, every turn of phrase has been artfully chosen by the writer so it resembles the coloured yet troubled world of artists.

The artists, heroes and villains of this book are all miniaturists belonging to the Ottoman Empire. Caught between their loyalties to olden Herat masters and new and lucrative Frankish techniques offering recognition and fame, these miniaturists live in times of intense turmoil. Working together, yet individually, on a secret book commissioned by the Sultan, they are pitted against each other. Jealousy, rivalry and suspicion lead to the murder of one of the miniaturists by another, and the drama begins to unfold.

The principal characters are the murdered miniaturist, Elegant Effendi; the royal workshop head, Master Osman; the co-ordinator of Sulatan's book, Enishte Effendi (who is also murdered along the way); his nephew, Black Effendi; his daughter, Shekure; Esther, the Jewish clothier and matchmaker; and three other master miniaturists, nicknamed Olive, Stork and Butterfly. It is known to the reader that one of this trio is the murderer, but Pamuk carefully conceals his identity till the end.

The narrative is done through each of these characters, and there's a breathtaking change of perspective with every successive chapter. A narrative of this style is quite unlike anything I've ever read before. The chapters are simply titled 'I, (character name)', so the reader knows easily whose voice he is hearing. Pamuk slips effortlessly from the mantle of a murdered to an artist, to a woman to a man. There are these exquisite chapters where the author even assumes the voice of a colour, an illustration or a mythological character, thus making organic the world of paints, brushes, and passion. His lines can easily be likened to brushstrokes, not big and broad, but fine like a miniaturist's. After all, it took Pamuk nearly eight years to create this masterpiece. 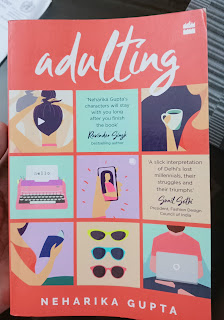