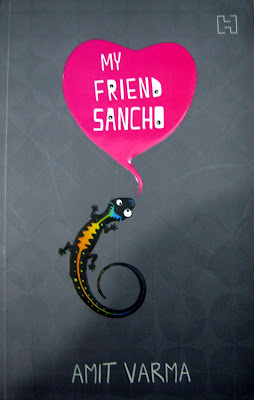 AUTHOR – Amit Varma is a writer based in Mumbai. He has worked in advertising, television and journalism, and has written for publications like The Guardian, The Wall Street Journal and Wisden Cricketers' Almanack. He was a Managing Editor of Cricinfo India. He also writes the popular blog, India Uncut,which won the Best Indiblog Award at the Indibloggies in 2005. In October 2007, Varma won the 2007 Bastiat Prize for Journalism, which aims to honour writers “whose work cleverly and wittily promotes the institutions of the free society. In 2008, his first novel, My friend, Sancho was one of the novels nominated to the longlist for the Man Asian Literary Prize 2008

SYNOPSIS – When crime reporter Abir Ganguly is called out by the police to cover a routine arrest one night, the last thing he expects is a shootout. But bullets are fired, and a man is dead. There is ambiguity about what led to the shootout and was it needed at the first place or not.

Abir is left with the responsibility of reaching the depth of the question whether the cops screwed up? Abir's boss,not knowing that he was at the scene if the crume, wants him to file a story about the victim. For this, he must meet Muneeza, aka Sancho, the dead man's teenage daughter. Over the next few days, an unlikely friendship forms between the glib, wisecracking 'armchair cynic' and the simple girl who 'travels on buses'.

Can their fragile relationship survive the circumstances that brought them together? More importantly, can it survive the machinations of the jealous lizard that shares Abir's flat?

The story is written in first person, that of protagonist Abir Ganguly narration, which at almost all places in the book is no less than sheer brilliance. The novel revolves around his experience as he goes about doing research for a sensational news story that involved the shooting of an innocent Muslim by the Mumbai Police, and his subsequent meetings with Muneeza, the daughter of the deceased. Muneeza's nickname was 'Sancho', which explains the title of the book. It is a character-centric book, in which the trials and twists in the screenplay does not come from the basic Story, but from the character's motivations and catharsis.

The book interestingly unfolds a number of sub-plots, as the reader knows the protagonist and people around him in more depth but sadly in the end the story fails to deliver anything substantial to wrap the central plot-line. The amazing part is that even though nothing much happens all through the book, it still holds your attention because it fulfills the basic premise when you decide to pick a book - it entertains you and that too, to the very fullest. The romance between Abir and Muneeza has a fresh feel of innocence. The author never portrays it as a full fledged love at first place and neither speaks of it as an inter-religion or a caste issue, and that partial understanding or deepness makes the instances between them adorable, cute and so memorable. The moments of introspection and procrastination have been written with a deeply entertaining narrative that makes you cringe with embarrassment at times too since you may have experienced them yourself at some point of time in your life.

What is excellent in the book is the contemporary relative humor and an adorable charm of being wacky and sarcastic at almost all places and situations in the narrative. There are punch lines every now and then and too many similar references of cow, politics and pet animals just like it had always been on his blog. My Friend Sancho is strictly R-rated; it has the fun being able to read the minds of someone without any censorship.

Engaging dialogues, crackling wisecracks, and long food-for-thought passages, the book always keeps you on the edge of your seat, with a grin on your face. All the characters are grey, even Inspector Thombre who has kills Muneeza's father by mistake is portrayed to be sympathetic, citing his low case upbringing. It is pretty evident that the author doesn't want to take sides and let readers decide what is right and wrong in the characters. That reminds me of a memorable part of the book, One of the most delightful speech in the book, given by a policeman about “the beast called the Government” – while speaking in bullet points. It is a fantastic libertarian speech, and it is even more fantastic that it is delivered by the possibly corrupt inspector.

The low down of the book is the sudden end leaving you unfulfilled about the climax of the story that have captured your fascination by this time. The book hurries you. For instance, Muneeza's character was still growing on me when the book ended. There was also an indication of sequel in the way it ended but I don’t think that would be the case, It is just one of those books which leaves you with smiling memories and imaginative ends from your own perspective. I would also point out the good job he does in limiting the number of lines given to the lizard – he does it in a way such that it appears as if the lizard represents the narrator’s conscience.

Overall, I found the novel to be an enjoyable read. At 217 pages in relatively large size text, it would interest the casual readers also who can't keep their attention long enough to complete a book. I was able to complete it in a single sitting of four hours on a train journey in which I ended up startling my fellow passengers many a time with laughter. If you are cynical and also find yourself every now and then thinking too deep about small-small things in day to day life, then this one is surely for u! As for me, I am now waiting for Amit Varma’s next book venture; he is a rock star when it comes to entertaining narration, a skill that even some of the most sold out young writers of our country lack.