Knots and No Crosses by hitesha Deshpande

Heartbreak after heartbreak, he still dreams of a perfect wedding...
"The woman he had no intentions of loving, but who he did love, hopelessly. The woman he had no intentions of dating, but had ended up committing himself to. The woman who had always been four years older than him, but realized it only when she was about to hit London for a PG course.
The woman who had gotten into the car without looking back once, as he stood there on the empty streets outside the institute nursing a broken heart.
Patty, the woman who was today married to some investment banker and a mother of a four year old, who had somehow heard of his wedding and had decided to message him. She sure deserved an invite." 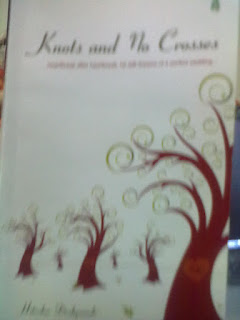 Synopsis:  Akkie’s relationships have followed a trial and error pattern. He finally meets the one woman who completes him. They both plan their ‘dream wedding’, only, the wedding turns out to be anything but a dream! As Akkie tries to placate his agitated bride three days before their wedding, his past catches up with him, spelling disaster after disaster. The crunching blow comes, when the son of his first ever girflriend calls Akkie ‘Papa’ in front of a room filled to capacity with the bride’s family. The wedding gets called off.  But Akkie knows, there is no one else for him, but her…
Nimue Says: I had never seen such a clever synopsis,was much more impressed after reading the book !! whoa , what a fun ride this book was. Detailing the events of 3 days before Akkie's wedding plus all the relationships he had over the time , this book is nothing like a predictable tale. Even if the future of most of his relations could be predicted , the ups and downs he had , the lessons learnt and his hopeless plight at the end of each of such phase was both hilarious and bit touching. Akkie who imagines a scenario of marrying the girl with whom he is , thinks of conversations his family will have with him regarding to the gal actually symbolizes his desires for a steady relation. I could so relate to him at such times. Even though I found one or two descriptions a bit too much made up, over all, the book maintained its humor , the goof ups , accidental meetings and a theme its all fate , how and where you meet your love. and till then, the ride is a learning for all of us.
Akkie is a really nice , hard working , sincere and charming guy. The girls in his life all are as different from each other , as their impact on him. His fiance is caring , nervous before the wedding and much understanding till things go really haywire.  Akkie's family is a typical Indian ensemble, gathered for a big fat wedding !
Go on, read this one any lazy day and you will be smiling for hours, trust me.
Ratings : 4.5/5
Other details:
ISBN: 9788122310481Pages: 188Price: Rs. 175.00
Posted by Pratibha at February 18, 2012
Email ThisBlogThis!Share to TwitterShare to FacebookShare to Pinterest
Labels: 4 star, General/Indian Fiction, Hitesha Deshpande, PratsReads