Could you survive on your own, in the wild, with everyone out to make sure you don't live to see the morning? 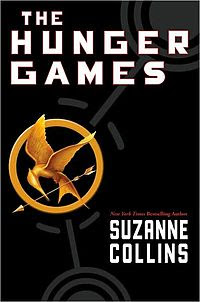 BEST SELLERS: Suzanne Collins is the author of the bestselling Underland Chronicles, which started with George the Overlander. In the Hunger Games, she continues to explore the effects of war and violence on those coming of age. Other books in this series are Catching Fire and Mockingjay.

In the ruins of a place once known as North America lies the nation of Panem, a shining Capitol surrounded by twelve outlying districts. The Capitol is harsh and cruel and keeps the districts in line by forcing them all to send one boy and one girl between the ages of twelve and eighteen to participate in the annual Hunger Games, a fight to the death on live TV.

Sixteen year old Katniss Everdeen, who lives alone with her mother and younger sister, regards it as a death sentence when she steps forward to take her sister's place in the Games. But Katniss has been close to dead before- and survival, for her, is second nature. Without really meaning to, she becomes a contender.

But if she is to win, she will have to weigh survival against humanity, and life against love. Suzanne Collins delivers equal parts suspense and philosophy, adventure and romance, in this searing novel set in the future with unsettling parallels to our present.

They do surgery in the Capitol to make them appear younger and thinner. In District 12, looking old is something of an achievement since so many people die early. You see an elderly person you want to congratulate them on their longevity, ask the secret of survival. A plump person is envied because they aren't scrapping by like the majority of us.

This is a book you'll find your nose buried in until you finish it. I just could not put it down; I was practically walking around reading it and consequently banging into things. The plot is, of course, outstanding. The book might not bring you to tears, but it will shake you to the core.

That I actually enjoyed reading the book kind of disturbs me somewhat, to be quite honest; considering the fact that the whole time I'd been cursing people for being so sadistically entertained by gory reality shows. Because, that's what this book subtly draws you attention to- the awful truth about the public, and the government. To punish the downtrodden for rebelling against the Capitol, and to remind them never to challenge their superiority, they introduced the disgracefully popular Hunger Games, which have 24 young boys and girls fighting each other, trapped in an outdoor arena that could be anything from a frozen wasteland to a burning desert. The catch? Only one would survive.

Katniss is a heroine you'll find hard to forget. Courage and caliber are what she's all about. A girl with prodigious hunting skills, she becomes the head of the family after the death of the father she loved. Immensely protective of her little sister, she volunteers for the Hunger Games. Knowing how little chance she has of winning- or in other words, surviving- Katniss leaves behind her family, and the boy who was in intricate part of her life, to step into unknown territory accompanied by another boy who she feels she owes her life to...

While the training sessions and makeovers are amusing, the gruesome deaths are all the more haunting because these are children we are talking about. Here's science fiction blended with philosophy; just the right touch of romance and a dash of humor. There are such a lot of unexpected surprises, right until the end of the story- it's fulfilling and there's still something to look forward to; like having a sumptuous meal and waiting for desert.

Eager to read the next book in the series.

PRICE: Rs.295/- (This was my reward for becoming the Member of the Month in February; I couldn't thank the admins enough for sending me this particular book. I'll always treasure it.)