The Hound of the Baskervilles- A Sherlock Holmes Graphic Novel 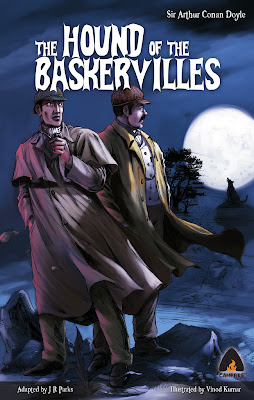 CAMPFIRE is a new generation of talented writers and artists who, inspired by the enduring relationship between a campfire and the stories it evokes, began publishing under the Campfire imprint in 2008, with the vision of creating graphic novels of the finest quality to entertain and educate their readers.

Their graphic novels are presently being published in four exciting categories- classics, originals, mythology and biography. For further information, please visit their website:

When Sir Charles Baskerville is found dead on the moors, a heart attack seems to be the likely cause. However, a certain Dr. Mortimer thinks there is more to it than that. Although it seems impossible, he believes that a supernatural hound is haunting the area. His theory suggests that this beast has been on the rampage for years, killing generations of male Baskervilles.

With the heir of the Baskerville estate returning home from Canada, and the mystery still unsolved, Dr. Mortimer turns to Sherlock Holmes for help. He is worried that the deaths will continue until all the Baskerville men are wiped out- or someone discovers the truth.

The unparalleled detective, Sherlock Holmes; his sidekick, Dr Watson, and an intriguing and mysterious plot make Sir Arthur Conan Doyle's The Hound of the Baskervilles a compelling read.

"This manor was once held by a man called Hugo Baskerville. He was a wild, profane and godless man...He sought the love of the daughter of a yeoman, who held lands near the Baskerville estate... Hugo's jealousy led him to kidnap her. He locked her away in his bedroom, keeping her for himself. One night, the girl fled into the moor...A terrible rage consumed him. He released his hounds and made a deal with the devil to catch the girl...But... as Hugo was about to act upon his rage, the hellhound of the Baskervilles, summoned from the fiery depths, came to claim its prize... His throat was torn apart by a foul thing- a great, black beast, shaped like a hound, yet larger than any hound ever seen.

It had been a long time since I'd read a graphic novel; and although I honestly feel that one cannot quite capture the charm of a novel while adapting it into a comic, this one made a delightful read.

I took my time reading this so as not to finish it off too soon. The plot is, of course, really interesting- the suspense keeps you hooked, even if some things are obviously predictable; like the fact that the charming Holmes could not possibly have remained absent during the climax. (Poor Watson thought he'd solve this mystery on his own.) 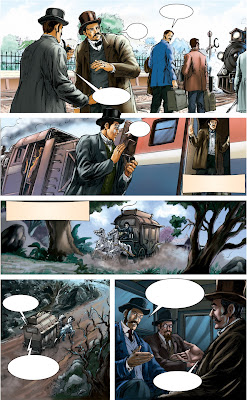 There are moments when you'd feel like they've caught someone red handed, and then would come an unexpected twist that would leave you confused. The culprit has the obvious motive, but it's hard to guess who it really is. The pictures and illustrations are brilliant; the font is just the right size, and the cover was so attractive that I was drawn to it immediately in the huge collection of comics that was put up. More than anything else, it was quite nice to read a comic for change. If you're in the mood to read one of late, go for this.

PRICE: Rs.160/- (Purchased at the National Comic Conference at Dilli Haat, when I went there with Nimue and had a blast; we were surrounded by books all around and thought we'd died and gone to heaven! :D
Posted by Arpita Mahapatra at February 25, 2012
Email ThisBlogThis!Share to TwitterShare to FacebookShare to Pinterest
Labels: Arpita, Arthur Conan Doyle, Campfire, Graphic Novel, J. R. Parks, Mystery Novel, Series - Sherlock Holmes