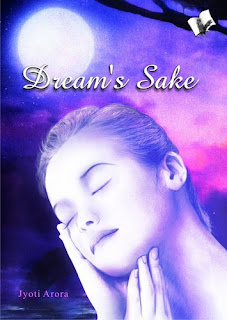 Book Cover says :“He can be as good as he wants to be and I’ll be as bad as I need to be! We’ll see where it all ends up,” says Aashi.

She believes she has a right to fight for her dreams. She believes a little bit of selfishness is necessary to survive in this world. Abhi, however, has not learnt that lesson. And he can’t accept the fulfilment of his hopes when they seem to rise from the ruins of Aashi’s dreams.

His sister Priyam and friend Sid are made from much the same mould. And in the path of their love too lies a dream – the dream of a dead and betrayed mother.

Feelings rise, and are suppressed. Past grips the present and threatens the future. Memories refuse to wane their shadows from the heart. Hope and despair fight a battle. Guilt rises up and resents the forgiveness. Revenge weaves a web. Friendship is tested. And love demands a sacrifice. A tumultuous battle wages on...

What lies at the end of this battle?
Swarnali Speaks : An author signed copy of this book was sent to me by the author.
It rarely happens that a book has earned neither my love or my wrath and this is one of them. I don't have any particular emotion about this book,its neither very good nor very bad. A pleasant read would be best said.
The best thing about the book were the snippets from poems in the beginning of each chapter which were closely intertwined with what was yet to be read. The snippets sent me wondering what possibly could the chapter reveal,which was something I really liked.
Almost all the characters in the book are regular stereotypes whom we have seen in either our own life or in daily soaps. Aashi is the regular ambitious kid who is ready to do everything to get what she wants. The title is very apt as its mostly about Aashi run for her dreams. Raj's mother is the typical jealous mother,the villain of our story. Abhi is the goody two shoes and Priyam is his saintly sister. I couldn't bring myself to count these two characters believable. The only character who came as a surprise to me was Raj. Sid was a little stereotyped but yet believable.
The end was maybe done a bit of a hurry and I kept wondering if Jyoti ji could have done with a better alternate ending. I personally felt the story good to be made into a spicy Bollywood masala movie.
What inspired me most was the author's life. She is fighting thalassemia, a serious medical condition which requires regular blood transfusions. Despite having a really hard life,Jyoti Arora comes up with this novel. A really good attempt for a debut author. Just wishing the book was a bit shorter,maybe then it would have been even more crisp.
My Rating :  3/ 5
Posted by Swarnali at February 27, 2012
Email ThisBlogThis!Share to TwitterShare to FacebookShare to Pinterest
Labels: Fiction, Jyoti Arora, Romance, Swarnali