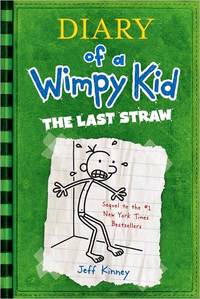 NAME OF THE BOOK: The Last Straw

Greg's dad wants him to change his wimpy ways, toughen up and enlist in other "manly" endeavors. And when he threatens to send Greg to military academy, Greg realizes he has to shape up...or get shipped out.

You know how you're supposed to come up with a list of resolutions at the beginning of the year to try to make yourself a better person? Well, the problem is, it's not easy for me to think of ways to improve myself, because I'm pretty much one of the best people I know.

First of all, I know this is going to make me sound like a control freak, but the reason why I picked this up was because I wanted to keep a track of the kind of fiction my kid sister reads. (Yes, it makes it look like I'm bossy when it comes to her; something that a certain someone on ALOP happily reminds me from time to time.)

ANYWAY, coming to the point, this book from the Wimpy Kid series is all about Greg Heffley's desperate attempt to fight the cruel world around him in their struggle to change him into a different person. (Note: exaggeration.) Our hero tries hard to hold on to everything that defines him: lethargy, wiles, and 'funk'. Greg is, in other words, exactly the kind of person who would want to weasel out of doing any substantial work. And for a wimp, he is quite proud of himself.

Greg does every possible thing to get you to profusely thank your stars that you do not have this sort of a guy anywhere in the vicinity. However, everything seems funny when it's happening to someone else, right, so I was obviously enjoying reading about his antics. While this does not really come across as the stuff that makes best sellers, the book is nevertheless entertaining- even if it is pretty lame.

The journal is full of ridiculous excuses that Greg comes up with, either to get out of joining a football team or writing his term paper, which will make you shake your head and wonder whether Greg is contesting for the Stupidest Joke of the Year Award (if there is one). In spite of the cheesy jokes and slapstick humor, the Diary has some portions that will definitely make you laugh out loud- I am talking about the hilarious illustrations, possibly the only impressive thing about this series. The best is probably the picture of Greg's younger brother who, according to one of my friend's mum, looks remarkably like an overgrown insect.

This is the sort of book you'd pick up when it's lying around and you'd rather read than watch something equally ludicrous on TV. Otherwise, you may skip this one.