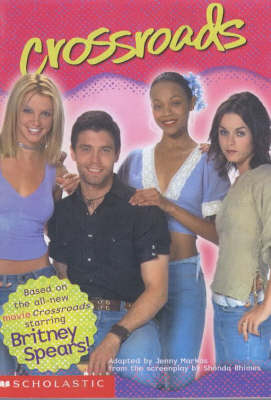 GENRE: Chick Lit/ Teen Fiction (Adapted from the screenplay by Shonda Rhimes; based on the movie starring Britney Spears.)

And on the day after graduation, those dreams bring Lucy, Kit, and Mimi together again- and lead them on a road trip across the country. Along the way,they'll bicker, banter, laugh, cry, and sing their hearts out. They'll find love, friendship, and loyalty. And they'll discover that where you end up is not as important as the people you bring along with you on the journey.

I can't stand it anymore. I meet Mimi's eyes and see that she can't stand it, either. I slide forward, reach over the seat, start to touch the radio dial.

"What are you doing?" Ben demands.

"What is with this music?" I demand back.

"Can we listen to something else for ten minutes?" I need a break. Desperately.

"No." His eyes are on the road. His face is stony.

"Come on, Ben," says Lucy, barely looking up from her journal.

Yes! I twist the dial until a pop station comes on. Soon, Mimi and Lucy and I are singing along, bouncing around in our seats. Ben's gritting his teeth. He can't take it. Finally, he reaches out and grabs the dial. Metal comes thundering out.

"You said five minutes!" Lucy yells over the music.

He just shakes his head. "I can't listen to that. Forget it."

Crossroads is one of those stories that sound entertaining- and are- but also happen to be the kind that belong to the less impressive category of teen fiction. It's amateurish, juvenile and stereotypical; yet, mercifully, a little better than the disastrous movie. The pictures included are pretty, though. And the first person narration by each of the characters gives it a personal touch. The rare portions with Ben speaking up are definitely amusing.

Having known each other since they were eight years old, Lucy, Mimi and Kit had made a pact to remain lifelong friends. However, when they enter high school, their differences draw them apart. They make new friends, face new challenges, and try to forget about the past. But on the day of the graduation party, they decide to keep their promise of meeting in the school grounds to dig up an old shoe box they'd decorated and buried when they were kids. Opening it, they are all overcome by nostalgia as they go through all those things they'd once held dear.

Mimi, the pregnant girl from the trailer park who misses her friends the most, tells Lucy and Kit about her plans to audition for a record company in L.A. When they express their shock, she tries to persuade them to join her and this guy she's getting a ride with. Tempted by her desire to meet her boyfriend, Kit ponders over the idea...as does Lucy, who is desperate to find the mother who abandoned her when she was a little child.

What follows is a bumpy ride that leads to self realization and a lot more. As the girls try to keep aside their differences, learn to accept the changes in each other and try to live life the way they'd always wanted to, they learn that dreams may change, but friends remain forever.