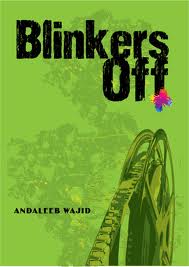 ABOUT THE AUTHOR : From writing stories for children to writing content for a technical documentation company, Andaleeb Wajid's career has always involved writing. So it was no surprise to her family or friends when she quit work completely to focus her time on writing books. Her 2009 debut novel, Kite Strings garnered critical praise and was longlisted for the Vodafone crossword Book Awards 2009. She also received favourable reviews for her short stories in Curtain-Stories by 9 women which was published in 2005. She is married and has two sons and lives in Bangalore.
BOOK COVER SAYS : "Is it going to be like Hum Aap ke Hain Kaun?"
Noor had no idea that this frustrating question will turn around the course of her documentary film in more ways than she can imagine. At present she is more concerned about Supriya,the college diva who will make sure that she walks away with the credit while Noor does all the hard work. Moreover, when Supriya's gorgeous boyfriend Dennis mysteriously makes an appearance in her film-making class, Noor has to deal with her burgeoning feelings for him.
The documentary is being shot at a wedding where Noor discovers the secret of teh bride's unhappiness. Should she help out and face the wrath of the bride's parents later? Should she involve Dennis as the bride is his best friend's sister? But as things come to a head at the wedding, Noor realises that there's no easy solution in sight, especially when the blinkers begin to come off.


EXCERPT : " The song played out and the next one was another favourite from the film, 'Tum aagaye ho, noor aagaya hai'.
I was horrified. Until this moment, I never realised that this song had my name in it! Aargh! ... Of course, he probably didn't even remember that my name was Noor."
SWARNALI SPEAKS: This is another book I got from winning a contest :)
I never expected these free books to be good,so had no expectations from this.  But this one turned out to be good,really good. Am pleasantly surprised.
Andaleeb Wajid does a great job with a modern love story with a twist. Yes it is basically a love story with the nerdy and kind hearted Noor, smitten by the super sexy Dennis,who happens to be the college hottie Supriya's boyfriend!! But what concerns a major part of the narrative is the documentary that Noor and her group try to accomplish for their film making course. The wedding, which is the subject of the film, the confusion and suspense over the bride's sudden misery and finally the resolution of the entire affair makes an interesting read.
The characters and quite realistic and the situations are plausible,which I particularly liked. Quite a respite from fairy tale love stories where everything impossible happens. Noor , Supriya, Ashmita, Suvarna, Rohit and Sridhar are characters which everyone of us has seen sometime or the other. My favorite was Noor's bro Roshan, who seems to be extraordinarily smart in guessing Noor's thoughts and who comes up with the wittiest stuff. The only character that I didn't find quite believable is Dennis. Do such guys still exist?? If yes,please tell me where are they?? :P
This is a book which makes for a light breezy read, but with substance. The language is simple and I liked the few colloquialisms used here and there. Also, I liked that she explained some of the basic rituals in a Muslim wedding (which I didn't know before), without being communistic. The whole idea of an Indian wedding being Indian in its root,despite the religious or communistic differences is something I loved. The approach to religion was handled very deftly and I really appreciate her for it. Looking forward to read more from her.
My Rating- 3.5/5
Posted by Swarnali at February 27, 2012
Email ThisBlogThis!Share to TwitterShare to FacebookShare to Pinterest
Labels: Andaleeb Wajid, Fiction, Swarnali