You were my crush.... till you said you love me 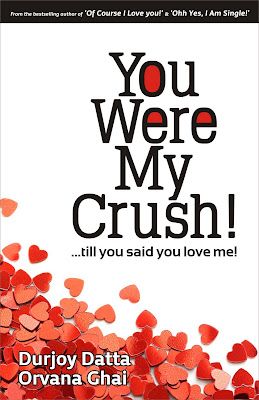 All his books are apparently (as written in its texts time and again) inspired from real life incidents.

From the cover stats, His books have sold a total of 1,000,000 copies till date making him one of the highest selling Indian authors till date and also One of the youngest and the most prolific authors in the newly emerged coffee table paperback Indian fiction scene.

Durjoy is a mechanical engineer from Delhi College of Engineering (DCE) and did his management from MDI, Gurgaon in 2011, he now co-owns a publishing house with other writers of similar genre like Sachin Garg of the “I’m not 24, I’ve been 19 for 5 years” fame.

Orvana Ghai is the co-author of this book

SYNOPSIS – Durjoy Datta's fifth book highlights itself as a true story based on his misunderstood brother - Benoy Roy. People say a lot of things about Benoy.

'I love him, but I don't want him to drive a Bentley,' his mom says, Or used to say. She is dead now. He drives a Bentley.

'He is a stranger to me. I haven't seen him since he was eight. I receive his credit card bills though,' his dad says.

'He should stop drinking,' his maid says.

'Good for nothing, brat!' his best friend, Diya says.

'I never want to see you again. Stop stalking me or I will let my boyfriend know,' the love of his life says.

'You're the best,' his brother, Deb claims.

Between all this, who is the real Benoy?

This story is about him picking up the pieces of his life and trying to find a meaning out of it. A big car, a big house, does it solve anything? Why is that despite having everything, he has nothing?

You Were My Crush! is Durjoy's fifth book.

Pulkit Speaks – Nothing new to offer.

In the mid-end of last decade, when Indian Fiction scene started gaining popularity with the rise of Chetan Bhagat jonour of first person light hearted narrative, one of writers that emerged to be a highly loved person of that style was Durjoy. I have been closely following his rise right from the start of his writing career and have read all his works so far. Love them or hate them, but you can’t deny the fact that he sells, and sells big time.

This is his fifth book, as I have mentioned in the synopsis, it also is a Flipkart bestseller, and have great reviews there. Saying all that, I personally felt that this book is among all his titles, the most predictable, boring and substance less. After the days of “Of Course I love you… till I find someone better”, and “Now That you are rich… Let’s fall in love”, Durjoy’s ability to bring something fresh on the table have constantly been on a low down. His last three books, including the one I am reviewing this time have failed to bring on my face a fresh story, that has characters not resembling his first two titles.

In third and fourth book, he almost re-narrated the first two in more elaboration and yet succeeded in selling so many copies, which shows that he does have a fan base, which reads his work irrespective of the originality of Idea and storyline base that it offers.

The third and fourth titles, still had more moments of fun as compared to this one. This book clearly shows how it has been rushed into publication and lacks the Durjoy Magic that his initial books had. Benoy Roy’s character has nothing new to offer, he has no shades that have not been displayed by Deb in some portion or another in past titles. His dad is almost too perfect to be true and you can almost predict 100 pages in advance to the end, how eventually he will fix everything in the same manner that he eventually fixes it. At times, its over flattery and attention for his charm, that makes it a little boring. His best buddy Eshaan is almost a side kick, that has no shade of his own, he fails to leave any impression on the mind of the reader and is almost never present in the story. Same tragedies have struck to Deb and Avantika, they are there, god knows why? And yet never there in any of the plot or main script scenes doing anything noticeable, the sheer presence less existence of those two is something that’s almost disturbing for someone like me, who have read so much about them in the past from his pen. Either those two should have not been a part of this at all, or they should have been given more backbone than what they eventually got. Diya, initially appears as a strong confident ambitious and composed girl who gradually become a close friend of Benoy, but after the entry of her super gorgeous sister Naina in the story, she is nothing but a name being mentioned once in a while after every few pages, just to remind readers that she is there and will suffer big mishaps just to connect dots of Benoy’s love life in the end. Their parents, in the story almost have no opinions of their own. They are confused and right from start to end, appears to be dependent on mercy of others wisdom to see the obvious. Naina’s fiancée is almost a ruthless mean greedy boy, one can wonder over the course of entire story what she might have initially seen in him, considering she is smart and beautiful and not so stupid and he is dull boring and almost a bastard. He is just black and have not even a shade of grey and there hardly is a line where he shows any charm that can make us believe that Diya and Naina’s parents were indeed in their senses when they agreed to marry their rose petal young daughter to him. I mean just because he showed up at their door and accepted a relationship with her, cannot be any substance full reason to accept him as a son in law, considering the asshole he is in the whole of book.

The girl Naina, plainly comes out of fantasies, too good to be true like most of the leading ladies of Durjoy’s books, she too is smart, witty, confident, cute, charming and almost a sex goddess in bed. The love between her and Benoy, happens too easily and almost reaches its climax of success abruptly in the same manner. Their chats and sms’es being the only cheesy lines that can make one smile, this book otherwise suffers from so much lack of humor that by the time story drags to the accident of Diya and the frenzy surrounding it, one seem to have lost all interest in the core plot of Benoy’s life. The case might be that something which appeared fresh in the life of Deb in earlier novels is now nothing more than a repetitive overdose of predictable sex and boring conversations when u talk of this one.

I feel let down, by this one more so, because I was looking forward to see the independent writing of Durjoy, a person who already has a market base and could have experimented more in himself, especially since he was also the publisher of this one. But to one of his regular readers in me, he failed to deliver on grounds of not only story(unlike past two), but also as a fun-read, something his books are otherwise. The title is more interesting then the book. I have purposefully not said anything about Orvana Ghai’s writing because I am still waiting to read her, in any non collaborative write up.

Rating – 2 on 5. (Those 2 are for the cute chats and sms'es exchanged between Naina and Benoy in a few pages,somewhere in between). I restate despite being his critic from last two years, This writer is capable of far more then what he delivered this time again. A big let down and waste of 100 bucks. Looking forward to read him again, when he comes up with yet another title in the end of Feb. A book that, according to him, is his personal hard worked project.

PS – Admin talk – right at the start of this year, in Admin address, FL talked about how we are planning to make the website, more and more colorful, interactive and engaging for your experience.

For this, we will be coming up with reading challenges, book review targets, games, personal Get Together events for Readers and writers of this page, Authors Interviews that would feature many bestselling writers from Indian Fiction scene especially and something for which we are planning to Hire a reporting interviewer too, Book giveaways would be there like always, once in a while to bring a smile on your face… and many more other exciting things.

All your suggestions are welcomed in regards to the same. A constant feedback will keep us make sure, that we are on the right path. And by right path, I mean, the path that u want us to tread on.

So mail at alotofpages@gmail.com or contact us on Twitter or Facebook to make sure that u let us know, everything that’s in your mind. We shall answer every mail or message received, that’s a promise that I make in our endeavourer to keep this medium as interactive as it can be.