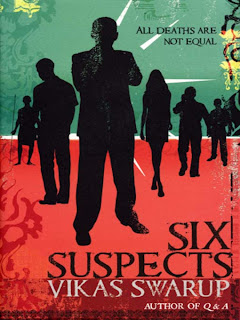 Synopsis:
Sever years ago, Vicky Rai, the playboy son of Home Minister of Uttar Pradesh, murdered Ruby Gill at a trendy restaurant in New Delhi simply because she refused to serve him a drink.
Now Vicky Rai is dead, killed at his farmhouse a party he had thrown to celebrate his acquittal. The police cordon off the venue and search each and every guest.
Six of them are discovered with guns in their possession and are taken for questioning.
Who are these six suspects? And what where they doing in the farmhouse that night?

Excerpts:
Not all deaths are equal. There is a caste system even in murder. The stabbing of an impoverished rickshawpuller is nothing more than a statistic, buried in the inside pages of the newspaper. But the murder of a celebrity instantly become headline news. Because the rich and the famous rarely get murdered. They lead five star lives and unless they  overdose on cocaine or meet with a freak accident, generally die a five star death at a nice grey age, having segmented both lineage and lucre.
That is why the murder of Vivek "Vicky" Rai, the thirty two year old owner of the Rai Group of Industries and son of the Home Minister of Uttar Pradesh, has been dominating the news for the last two days.

Maithili Speaks:
This was a review on request and I must thank the one who requested it. It was a very good book . One that goes with  a lot of research and reality to it.
The plot is built around the murder of Vicky Rai who has a number of criminal record but had managed to stay free. From moving his car over pavement dwellers to killing black bucks (guess who??) and the murder of Ruby Gill (another case of reality). When he is murdered at his own party the six suspects are:
Actress Shabnam Saxena, a tribal named Ekati from Andaman, an American fork lift operater called Larry Page, a mobile theif Munna mobile, Mohan Kumar - a corrupt bureaucrat who feels he is Mahatma Gandhi due to some mental problem and Vicky  Rai's own father- Jagannath Rai.
What motive could these people possibly have and how did they land up at the farmhouse makes the story. A very detailed description of life of the above suspects, a good building of plot and you just cant ignore the honesty of the book.