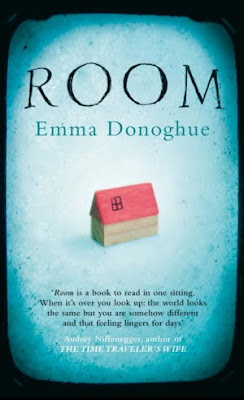 BEST SELLERS: Slammerkin; The Sealed Letter; Room was long-listed for the 2011 Orange Prize; won the 2011 Commonwealth Writers' Prize (Caribbean and Canada); and was shortlisted for the Man Booker Prize in 2010.

It’s Jack’s birthday, and he’s excited about turning five. He lives with his Ma in Room, which has a locked door and a skylight, and measures 11 feet by 11 feet. He loves watching TV, and the cartoon characters he calls friends, but he knows that nothing he sees on screen is truly real- only him, Ma and the things in Room. Until the day Ma admits that there’s a world outside…

When the door knocks, Ma lets Dr. Clay in, she puts her mask back on and mine. He’s not very scary now.
‘How’re you doing, Jack?’

His plastic hand is up and he’s waggling his fingers, I pretend I don’t see. I’m not going to give him my fingers, I need them for me.

This is a book that I’ve been eager to read ever since I saw it on display; having finally got it, I can say it was worth the wait. Reading the synopsis got me drawing my own conclusions about what might have caused this woman to keep her kid confined in a room for five whole years; I wondered how she managed to survive herself, or whether she’d been making trips outside while she kept her son hidden away for reasons unknown. There was much more to the story than I’d expected, or predicted.

Tempted though I am to let you make your own guesses, because that would only add to the shock that you’re likely to get when you realize what led to this situation, I must hint at the cause- for what I found best about the book was the way the plot developed AFTER the mystery behind the confinement was revealed. What we usually get to read is a story which ends with the ‘bad guy’ getting punished, and the protagonist living happily ever after. What we see here is the story after the supposed ‘ending’.

The first person narrative by none other than a five year old brings to the fore the effect of change and a person’s reaction to it, a person's need for closure, and society’s attitude towards anything that’s out of the ordinary. Beautifully depicted is the loving bond between a mother and a child, and their separate methods of handling change, of looking at life, of dealing with problems. This novel does have some flaws, and I was a shade disappointed by the fact that it didn’t turn out to be the thriller that I thought it would be. But what was amazing was that it wasn’t a dark, depressing story.

Sure, there were scenes where I almost felt claustrophobic just reading about Jack and his Ma’s life in Room; but the humor in the novel definitely took me by surprise. Jack is possibly the most adorable toddler ever written about; I actually wished I could give him a big hug, such was the impact that his narration left on me. In fact, there were certain moments when I laughed out loud, as I read Jack’s hilarious comments which were so wonderfully innocent. With endearing characters that deal with real life problems that threaten society, Room will open your eyes to the world Outside. Go for it.