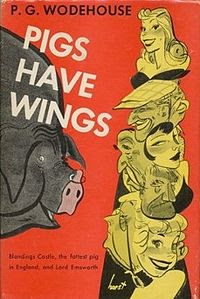 ‘You don’t analyze such sunlit perfection; you just bask in its warmth and splendor.’ – Stephen Fry

Can the Empress of Blandings win the Fat Pigs Class at the Shropshire Show for the third year running? Galahad Threepwood, Beach the butler and others have put their shirts on this, and for Lord Emsworth it will be paradise on Earth. But a substantial obstacle lurks in the way: Queen of Matchingham, the new sow of Sir Gregory Parsloe-Parsloe, Bart. Galahad knows this particular pretender to the crown must be pig napped. But can the Empress in turn avoid a similar fate?

In this classic Blandings novel, pigs rise above their bulk to vanish and reappear in the most unlikely places, while young lovers are crossed and recrossed in every room in Blandings Castle.

‘…Pardon me, m’lord, can you see Sir Gregory Parsloe?’

‘No,’ said Lord Emsworth, having glanced about the room and failed to do so. ‘Where is he?’

‘Sir Gregory telephoned a few moments ago to say that he would be glad of a word with your lordship. He informed me that he was about to walk to the castle.’

‘So Sir Gregory gave me to understand, m’lord.’

‘What does he want to walk for?’

‘It’s three miles each way, and about the hottest day we’ve had this summer. The man’s an ass.’

To such an observation the well-trained butler, however sympathetic, does not reply ‘Whoopee!’ or ‘You said it, pal!’ Beach merely allowed his upper lip to twitch slightly by way of indication that his heart was in the right place.

You do not need to have a look at the back of a Wodehouse book to know that it’s going to be good, because it’s bound to be. Pigs Have Wings is in fact a sequel to Blandings Castle; however, I happened to read this one first and it was as easy to follow as a book that isn’t part of a series. Although some references might go over your head and not make much sense, on the whole, you’ll find yourself with a smile on your face all through the reading of this novel.

Despite being someone who doesn’t really care about the rearing of pigs, I found myself sympathetic to the adorable, forgetful Lord Emsworth- whose life seemed to depend on his wonder pig, Empress of Blandings, winning the Shropshire Show. (Incidentally, the fattest pig wins.) The funny thing is, while one tends to relate to his annoyance with his domineering sister Lady Constance Keeble, it’s equally difficult not to empathize with her exasperation with the Earl’s abysmal memory.

Beach the butler- with his sophisticated aura (trust me, he’s more so than the gentry in this book) and incredible patience is my favorite, although every character is so charming that it’s tough to decide who you like more; the shrewd and impressive Galahad Threepwood might just be the one I like best apart from Beach. The way he tries to get the Queen of Matchingham out of the way, so that the Empress gets the first prize and he- among others- wins the bet, and the consequences of his actions are wonderfully amusing.

And then there’s the fantastic sub-plot revolving around several couples which seems to be a brilliant parody of love; as each of these characters tries to unite with their beloved (or escape them), their lives become intertwined with hilarious results. Wodehouse books are well known for their happy endings, and this one would not leave you disappointed. Looking for entertainment and subtle humor? This is the one for you.