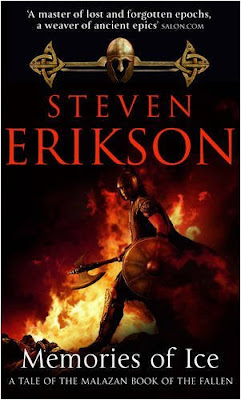 AUTHOR - Steven Erikson
BEST-SELLERS - Gardens of the Moon
SYNOPSIS - A terrifying force has emerged from the ravaged continent of Genabackis. Like a tide of corrupted blood, the Pannion Domin seethes across the land, devouring all who fail to heed the word of its propher, the Pannion Seer. In its path stands an uneasy alliance: Dujek Onearm's Host and Whiskeyjack's veteran Bridgeburners alongside old adversaries - the warlord Caladran Brood, Anomander Rake and his Tiste Andii. Outnumbered and mistrustful, they must get word to potential allies, including the Grey Swords, a mercenary brotherhood sworn to defend the besieged city of Capustan at all costs.

But more ancient clans are gathering. In answer to some primal summons, the T'lan Imass have risen. For something malign threatens this world: the Warrens are poisoned and rumors abound of a god unchained and intent on revenge.

SYNOPSIS - Torches lit the area, feeble in their battling the unnatural darkness that shrouded the city. The air stank of smoke and mortar dust. Distant cries of pain rose every now and then, like haunting memories.

We were brittle. Destroyed months ago, outside Pale, it's just taken this long for the few of us left to realize it. Hedge, Trotts, Detoran. Corpses who keep saluting -

Blend spoke beside her. 'I told the Rhivi on our wagon to wait inside the north gate.'

Our wagon. The wagon carrying the dead Bridgeburners.
First in.
Last out.
For the last time.

Whiskeyjack and Dujek Onearm meet with Anomander Rake, Caladan Brood and the rest of the Tiste Andii to prepare an alliance for a much bigger threat in a distant continent. The land of Pannion Domin is waiting to erupt. Elsewhere, the Crippled God who was struck down to the mortal realm plays his hand as he poisons the very warrens used by the mages and Ascendants.

Changes come into Paran as he is slowly pushed into a role he never wanted to be. With only 38 Bridgeburners remaining Paran and his squad marches alongside Caladan Brood and Kallor to fight the new threat. But old enmity is hard to forget as secrets threaten to fling the alliance into chaos. And this is when Silverfox comes to the scene. Nightchill and Tattersail reborn, Silverfox announces that she has summoned the T'lan Imass for reasons she won't divulge.

The defenders of Capustan, the Grey Swords, receive word from Quick Ben that the Malazans and allies are on their way. Given an impossible task of surviving the seige of Capustan for 6 days, the Grey Swords give their all to save the city from the scores of attackers. And just when they were about to be run over, the Bridgeburners announce themselves to the enemy.

Capustan is liberated but the enemy is not defeated. And from here, the secrets of the two ally armies threaten to separate them. What follows in the final battle is the end of the Bridgeburners. First in, Last out....for the last time. The ultimate betrayal by Callor results in the death of one of the most amazing and loved characters of the series, Whiskeyjack! The final battle takes them to horrors unseen as Anonmander Rake strikes a fatal blow to the enemy but a very deep cost. The home of the Tiste Andii, the flying fortress is sacrificed to bring down the Pannion Seer.

With Whiskeyjack, Hedge, Trotts, Detoran dead, only a handful of the legendary Bridgeburners survive. And Dujek finally disbands them giving them their much deserved respite. With the death of Whiskeyjack and the betrayal of Kallor, the Malazans and Brood and Rake form a friendship that may yet survive the madness to come. Because Empress Larseen has ordered Dujek back to the Seven Cities to assist Adjunct Tavore against the uprising called the Whirlwind.

I hate to admit but I choked when they fell. When Silverfox/Tattersail failed, when Whiskeyjack fell, when the Bridgeburners died one by one, I felt like shooting Steven Erikson. No more, please I pray the rest survive till the end of the series.

Memories of Ice is by far the best book of the lot till now. Steven Erikson is a master story-weaver.

Posted by Freelancer at January 01, 2012
Email ThisBlogThis!Share to TwitterShare to FacebookShare to Pinterest
Labels: Fantasy, Freelancer, Series - The Malazan Book of the Fallen, Steven Erikson