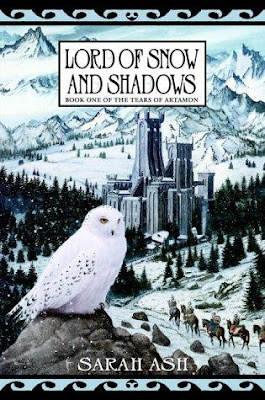 LORD OF SNOW AND SHADOWS

Book 1 of 'The Tears of Artamom'

BEST-SELLERS - 'The Tears of Artamom' Trilogy

SYNOPSIS - Raised by his protective mother in the sunny climes of the south, Gavril Andar knows nothing of his father - or of the ominous legacy that awaits him. But now the man who ruled the wintry kingdom of Azhkendir, a man with the burning blood of the dragon-warrior known as Drakhaoul - has been murdered by his enemies.

Expected to avenge his father's death - and still his unquiet ghost - Gavril soon learns that becoming Drakhaon means not only ascending to the throne of Azhkendir but slowly changing into a being of extraordinary power and might. A being that must be replenished with the blood of innocents in order to survive.

EXCERPT - Suddenly hot and faint from the loss of blood, Gavril felt as if he were falling deep into drowning waters. The red torchlight flickered and grew dim...

Were they going to let him bleed to death?

Kostya pressed a pad onto the edges of the cut, swiftly and skillfully binding it firmly in place.

"The ritual bloodbond between the Drakhaon and druzhina. Sealed in your blood." Kostya took up a ring of ancient keys, rusty and intricately forged, from his belt. "These are the keys to Kastel Drakhaon. Take them; they are yours. Now you are free to go wherever you will."

FL SPEAK - This is one trilogy that I regret picking up late.

Gavril Andar. A young boy's life is about to turn into a nightmare when a dark cloud engulfs him one day. Next thing he remembers is that there is another being in his head which shows him visions of his father, he never knew, being murdered.

The tale of a painter boy in love with a princess turns disastrous when he realizes that he is the ruler of a far away kingdom of barbaric people. But the great power he inherited came with an ever greater curse. The voices in his head grows louder for vengeance as Gavril fights to stay in control of his body and emotions.

Elsewhere the ruler of Tielen prepares to conquer the kingdom of Muscobar, but in his way is the land of Azkendir where Gavril Andar is the ruler. As the forces clash for supremacy, Gavril must give himself up to achieve the terrible power he needs to unleash to save his kingdom. But with every use of his power granted to him, he becomes less human.

The Drakhoul in him screams for vengeance to seek out the killer of Gavril's father while his mother is turned into a pawn in a game of deadly betrayal. With the duty towards his kingdom in one hand and the life of his mother on the other, Gavril must find a way to save both before the Drakhoul finally takes control of him.

Stunning 1st book. What I loved most about this tale was the European flavor in the setting. Also there are few characters and it helps in not getting lost with everyone's perspective. This may not be a brilliant book in terms of fantasy but it certainly is unique.

Not much to complain about, as I certainly did like it. I would recommend this for sure. The only negative point maybe is that I read it in a couple of hours. I certainly wanted it to last and stretch a bit more. Good beginning though. Am anxious to know the fate of Gavril and Muscobar in the sequel.