A review by FL and NIMUE 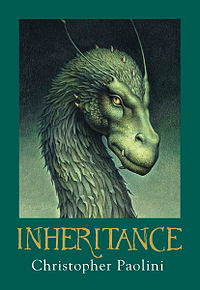 Book 4 of "The Inheritance Cycle"

Not so very long ago, Eragon - Shadeslayer, Dragon Rider - was nothing more than a poor farm boy, and his dragon, Saphira, only a blue stone in the forest. Now the fate on an entire civilization rests on their soldiers.

The Rider and his dragon have come farther than anyone dared to imagine. But can they topple the evil king, Galbatorix, and restore justice to Alagaesia? And if so, at what cost?

EXCERPT - Saphira leapt forward. Her entire body left the ground for a moment, and then she leapt upon all fours and snapped up first one, then two, then three of the snails. She did not eat the last snail, the one hiding in its shell, but drew back her head and bathed it in a stream of blue and yellow flame that lit up the land for hundreds of feet in every direction.

She maintained the flame for no more than a second or two; then she picked up the smoking, steaming snail between her jaws - as gently as a mother cat picking up a kitten - carried it over to Eragon, and dropped it at his feet. He eyed it with distrust, but it appeared well and truly dead.

Now you can have a proper breakfast, said Saphira.

He stared at her, then began to laugh - and he kept laughing until he was doubled over, resting his hands on his knees and heaving for breath.

What is so amusing? she asked, and sniffed the soot-blackened shell.
FL Speak - And thus concludes the tale of Eragon.

Inheritance starts off where the last book ended. The Varden's battle march towards the city of Urubaen continues with Eragon and Saphira at the head of their army. It seems like Galbatorix is content to let them win and patiently waits till they reach the capital.

At Belatona, Saphira barely survives a close call as she is attacked by a weapon of the old magic, Dauthdaert. In the olden days, it was created by the elves, for one and one purpose only, killing dragons. Saphira survives and Arya and the elves hold on to the weapon hoping that it will be the best way to kill Shruikan, Galbotorix's dragon.

As the Urgals and Dwarves join the Varden and the march takes them closer and closer to Urubaen, Nasuada orders Roran to go to Aroughs and bring the city to its knees. Eragon and Saphira attack the city of Dras Leona but Murtagh and his dragon, Thorn wreck havoc among the Varden. Even though Eragon manages to trick Murtagh by letting him chase an imaginary Saphira while the Varden slowly take control of the city. Eragon's ruse is discovered but Thorn is injured and Murtagh flees off. The Varden captures the city and a night of jubilation ends in distraught when Murtagh sneaks into the camp and kidnaps Nasuada.

Without a leader, the Varden look up to Eragon to lead them to battle. Eragon flies off with Saphira to the fabled ruins of Vroengard, the home of the Riders to search for a solution to defeat Galbatorix. As the Varden draw closer to the capital, Eragon and Saphira launch a surprise attack on the city. To their dismay, the realize that none of their magic works within the city as the soldiers of the Varden and the Empire clash. Arya, Elva, Eragon and Saphira make their way to the throne room where waits Galbatorix with Murtagh and Shruikan.

The ultimate face-off was disappointing. Even though the battle of Murtagh and Eragon opened to us the mind of Murtagh, Eragon's fight with Galbatorix was a huge turn off! Not surprisingly since Paolini himself wondered if he would be able to finish this book and this shows in his writing. The last 100 odd pages dragged on and on. And even in those 100 pages, readers are left with more questions than answers. What happened to Murtagh and Thorn?? What happens to Arya now? who really is Angela?

Nevertheless, the tale needed an ending. The story of Eragon Shadeslayer and his dragon, Saphira Brightscales ends here. If you have read the first three, you need to read this. For closure.

Background [ of the 3 books] : Eragon , the simple village boys , finds a huge egg one day that hatches into the dragon beauty Saphira. That makes him the last rider, a group of heroes who were killed by another rider and now king Glabotrix.  Eragon joins the Varden who are fighting against the king. Also , his village is destroyed and the surviving families , led by his brother Roran join the war. In end of the third book, we meet Murtagh , the half brother of Eragon who has become slave to Glabotrix and has a dragon of his own.

Nimue Says  :  when you start a fantasy fiction novel , no matter how long / how many book long , no matter how original or inspired , if you get connected , you just get connected. And you HAVE to finish it. thats all that matters. finding the end. But do you accept the end ? Sometimes Not. Every series has one character whom you want to see happily settled. And this time both Eragon and Saphira made me stay up each night to read their story. Specially the blue beauty Saphira.

Its amazing , the bond they share, the way they connect , communicate , smile and cry together. The comforting shoulder each is to other , the protective wing of Saphira and the loving charms of Eragon - all makes one connected to them.

The book opens and goers on to describe the battles Varden has to fight to win the cities as they march towards the final confrontation with Galbatorix. I am surprised that Paolini did not introduce us well to the villain in any book before this. Galbatorix is as interesting , powerful and as dangerous as he should be.

His interactions with Nasuada( the leader of Vardens)  as she is taken captive and later with Eragon are both amusing , politely scary and his anger is depicted well. Alongside , we get an insight into Murtagh's character and his thoughts. Finally he is not just a bounded entity but a person with his own ideas and ways.

This is all well, a little slow and bit haphazard but still I go on. And then we reach the OMG  plot of the book. More dragons ? Powerful ones ? yes ! We so needed that !!

And the final magic spell that destroys Galbatorix is something that moved me a bit. Impressive thinking there !

But but , the pages after that ..
the end , the justification, the sacrifices ...
No !! that was not an end I wanted or imagined.

Sigh!
I did cry. And that was for Saphira.

Ah! another chapter closed.
Have to pick up Richard's tales now.