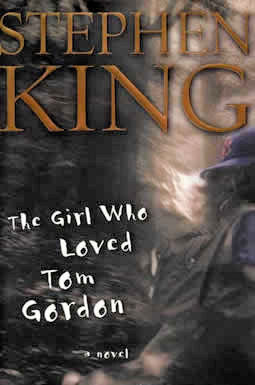 THE GIRL WHO LOVED TOM GORDON
GENRE: Psychological horror
SYNOPSIS:
Nine-year-old Trisha McFarland strays from the path while she and her recently divorced mother and brother take a hike along a branch of the Appalachian Trail. Lost for days, wandering farther and farther astray, Trisha has only her portable radio for comfort. A huge fan of Tom Gordon, a Boston Red Sox relief pitcher, she listens to baseball games and fantasizes that her hero will save her. Nature isn't her only adversary, though - something dangerous may be tracking Trisha through the dark wood
EXCERPT:
Trisha went down a mild slope, her sneakers slipping a little in a carpet of last year's dead leaves, and when she got to the bottom she couldn't see the Kezar Notch path anymore. Good. From the other direction, straight ahead through the woods, she heard a man's voice and a girl's answering laughter -- hikers on the main trail, and not far away, by the sound. As Trisha unsnapped her jeans it occurred to her that if her mother and brother paused in their oh-so-interesting argument, looking behind them to see how sis was doing, and saw a strange man and woman instead, they might be worried about her.
Good! Give them something else to think about for a few minutes. Something besides themselves.
Chandana speaks: I'll be honest. This book made my stomach churn. I skipped a few paragraphs because I couldn't bring myself to read his macabre descriptions. Putting a 9year old girl through that torture, even if its just a book, is completely heartless. I wouldn't have minded much if it was an adult. But then this is a Stephen King book and he is the master of horror and macabre, and that is exactly what you'll get. So let's move on to the story.
The story starts with a family hiking trip, Trisha, her brother Pete and her mother. To avoid listening to her brother and mother squabbling over her parent's divorce, Trisha falls back and wanders off the trail for a bathroom break. She tries to catch up by taking a short cut but slips and falls down a steep embankment and ends up hopelessly lost. All she has with her is a bottle of water, her walkman and some food. She listens to her Walkman to keep her mood up, either to learn of news of the search for her, or to listen to the baseball game featuring her favorite player, and "heartthrob," Tom Gordon.
Her mother and brother return to the car, call the police and start a search. Meanwhile Trisha decides to follow a creek (which turns out to be a swamp like river) because she read somewhere that all water bodies eventually lead to civilization. As the cops stop searching for the night, Trisha huddles under a tree to rest. A combination of fear, hunger and thirst makes her start hallucinating. She imagines several people from her life, as well as her hero Tom Gordon appearing before her.
Hours and soon days begin to pass, with Trisha wandering further into the woods. Eventually she begins to believe that she is headed for a confrontation with the God of the Lost, a wasp-faced, evil entity who is hunting her down. Her trial becomes a test of a 9 year old girl's ability to maintain sanity in the face of seemingly certain death. Racked with pneumonia and near death, she comes upon a road, but just as she discovers signs of civilization, she is confronted by a bear, which she interprets as the God of the Lost in disguise. In imitation of Tom Gordon, she takes a pitcher's stance and throws her Walkman like a baseball, hitting the bear in the face, and startling it enough to make it back away.
A hunter who has come upon the confrontation between girl and beast frightens the bear away and takes Trisha to safety, but Trisha knows that she earned her rescue. Trisha wakes up in a hospital to find her divorced parents and older brother waiting near her bedside. A nurse tells the girl's family that they must leave because "Her numbers are up and we don't want that." Her father is the last to leave. Before he does Trisha asks him to hand her her Red Sox hat (autographed by Tom Gordon) and she points towards the sky, just as Tom Gordon does when he closes a game.
PAGES: 224
RATING: 4/5
Posted by Chandana at January 13, 2012
Email ThisBlogThis!Share to TwitterShare to FacebookShare to Pinterest
Labels: Chandana, Psychological Thriller, stephen king