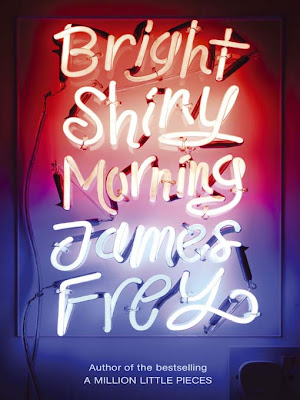 BRIGHT SHINY MORNING
GENRE: Fiction
AUTHOR: James Frey
Chandana speaks:
So this is the last and final book by James Frey. This is entirely fiction and is in no way connected to his previous books. But it is just as in-your-face, touching and truthful as the previous ones. The story is about L.A, a city of contradictions. It is a home to movie stars and to down-and-outs. Palm-lined beaches and gridlock. Shopping sprees and gun sprees. There are filmy snapshots that zoom in on the parallel lives of the many characters in the book, bringing their egos and ideals, hopes and despairs, dreams and anxieties to life. Its the story of L.A and its people. The land of dreams and also the land where dreams get shattered.
There are four main parallel stories:
Amberton and Casey - the rich actor and actress couple living in their huge mansion, with their kids, with all kinds of luxuries you can think of and leading a so-called perfect life. But what they hide is a deep and dark secret. Their marriage is a sham, a facade for the public. Amberton who thinks he can have it all, finally realizes that there are some things that are beyond his reach.
Old Man Joe - He is homeless, except for the bathroom where he sleeps at night. He sits on the beach every morning waiting for an answer. He hopes to do some good someday. His attempts at trying to save a spoilt teenage runaway backfire and instead result in getting someone killed.
Esperanza - the mexican immigrant with loving parents and obnoxiously large thighs. She spends all her life struggling to cope with her self-confidence and self esteem.
Dylan and Maddie - the madly-in-love young couple who run away from their respective dysfunctional families in search of a better life. They are both big dreamers. They are hopeful, in love, and their simple wish is to be together.
Frey throws in a few snippets of stories of people with dreams, hopes, who go west, who drive towards "the glow", to start a new life. And true to his style the ending is tragic. Some of them suffer, like the noble homeless Joe who tries to save the teenage girl, others gain and then suffer like the canny talent agent who turns sexual harassment into blackmailing advantage. Some are loaded or grounded or have luck on their side. Others like the countless actress-turned-waitress, singer-turned-hooker, or schoolboy-turned-gangster are plain doomed.
At first the title 'Bright Shiny Morning' seems to be making a mockery of the whole book. But somehow the stories wouldn't have been right with a happy ending. It is so disappointingly, tragically perfect.
This book has got a lot of mixed reviews. A lot of brick-bats from biggies like L.A Times and New York Times. I liked it, it made sense to me but its definitely not everyone's cup of tea!
PRICE : INR 295/-
RATING : 4/5
PAGES : 547