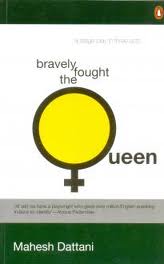 First staged in Mumbai in 1991, Bravely Fought the Queen juggles between two spaces centre stage where an empirical drama removes the mask of hypocrisy from a seemingly normal urban household; and a small, rear backdrop from where emerges the raison d être of each protagonist.

The family in focus is that of two brothers, Jiten and Nitin, who run an advertising agency and are married to sisters: Dolly and Alka. Their mother, Baa, moves between the two households, attached more to her memories of the past than to any present reality. Marital friction, sibling rivalry, the traditional tension between mother-in-law and daughters-in-law, the darker moments of business and personal dealings, the play takes us through the entire gamut of emotional experience as it winds to a climactic finish.

With its relentless pace, crisp idiom and unflinching insight into the urban milieu, this is a play that confirms Mahesh Dattani s reputation as India s most influential playwright.

"Lalitha: You stunt their growth. You keep trimming the roots and bind their branches...you've got to make sure,the roots don't have enough space to spread..."

Mahesh Dattani questions and challenges many universal questions regarding traditional and stereotyped gender roles in his plays. Through his plays Dattani explores the multiple facets of human relationships and their validity in today's world. Many of the subjects that he chooses cannot be comfortablyor directly discussed in an orthodox social milieu as in India.

Issues like incest,lechery,female subjugation amongst others are strongly condemned in India in public and Dattani very tactfully raises his voice on these social taboos in an oblique manner through a plethora of symbols.

In this particular play,Dattani takes the title from the famous lines of a Hindi poem by Subhadra Kumari Chauhan, that all Indians are sure to have heard in childhood-

The very first time I saw the book,it was the title which caught my attention. I couldn't help but be reminded of the same poem. Intrigued how a contemporary playwright could have used the same lines to tell a tale in the modern world,I picked it up and I can happily say I don't regret my decision!! I was so addicted after reading this one that i couldn't help myself from reading all his other plays and they are equally good.

This book is an amazing read especially if you are an Indian and if you are appalled by the hypocrisy in everyday things in the society. A very fast moving plot makes you feel like you are actually watching the play being performed in front of your eyes and you are yourself a character in it.

The title or book cover may suggest a feminist idea being propagated but I assure you that is not the only thing or issue being addressed in the book. This is not a light book as it may keep haunting you for several days as it did to me. The light hearted family talks in the first two acts take a sudden turn in the final act and the reader or viewer is left open mouthed as slowly everything is revealed. Dattani does a brilliant job in cleverly hiding the final surprises/shocks. A must read for all.

When you sit and think about what makes you like a book more than the others, one thing that definitely comes to mind is the way it makes you feel like a part of the story. But it's even more interesting when you don't feel like you're one of the characters, but that you are actually witnessing something real.

In the entire course of reading the play, I somehow felt like I was watching it live, rather than reading it- and it was an inexplicably exciting experience. It was even better than imagining myself as an invisible god who got to watch the proceedings without being involved. I didn't feel like I was a friend, of a character in the play, caught in an awkward situation where one has to witness a family drama. I felt like I was sitting in a dark auditorium and watching this fascinating play with bated breath.

There are eleven characters in all- two brothers (Jiten and Nitin) who marry two sisters (Dolly and Alka), the boys' mother 'Baa', Sridhar, the guy who works under them in the advertising agency, his wife Lalitha, and four other characters who never actually show up and are only referred to- Daksha, the old woman, and Kanhaiya, who is possibly the most intriguing character, if you ask me, apart from Praful (the girls' brother),who is a surprise package.

It might come across as a heavy read, when you think about the various angles to the plot. It definitely is a dark concept; it involves the 'dirty' secrets that people have to keep in order to keep up appearances. And it would surely stay on your mind for a long time after you've turned the last page.

Nevertheless, it's absolutely entertaining- and for those who do not like to get too much into the skin of the character, will find it a 'fun' read if they studiously ignore the ghastly revelations that can be disturbing in several ways, because they actually do reflect society the way it is. I guess it could give you a sadistic pleasure- catharsis, if you like, because you're not going through what the characters are.

There are certain situations where the playwright might or might not have been trying a hand at humor, but I certainly found the incidents amusing, all the more because they were just so true to life.

Dolly is seated on the sofa, wearing a dressing gown....she has a mud mask on....After a while, the doorbell rings. She gets up and opens the door to Lalitha....

Dolly: Well, I'm not going to be home very long....As you can see, I was getting ready. My mask is almost dry.

Lalitha: I lie down under the ceiling fan.

Lalitha: When I have my mask on. It dries faster.

Lalitha: Then I can do my afternoon meditation in shavasana at the same time. Once the neighbour's boy peeped in through our window and saw me lying flat on my back in the middle of the room. He thought I was dead or dying or something. He called the watchman. When I opened the door for them, they both thought I was a ghost, what with all the mud on my face and egg on my hair. (Laughs)

No response from Dolly.

Dolly: I'm sorry. I wanted to laugh but I was afraid.

Dolly: Afraid I would crack my mask.

The symbols, imagery and innuendos which foreshadow the consequences of the actions of the protagonists might be very accurate, but the play still has the kind of conclusion that will make your jaw drop. If you don't read this, you'll be missing something truly remarkable- you must go for it.

THIS EDITION PUBLISHED IN 2006 BY PENGUIN BOOKS INDIA

PS- This book happens to be one of Swarnali's most prized possessions, and she gifted it to me the first time we met. I have to say, it was the perfect present.