Suresh Taneja's 'We can Pull it Off'


Suresh Taneja's 'We can pull it off'-the review

At a time when even the judiciary isn't entirely free of corruption,Suresh Taneja's debut work as a writer 'We can pull it off' comes across as a relevant book.Suresh not only envisages a corruption free,super power India by 2030 but also puts forward a novel strategy to achieve the goal.

'WPTO' tells the story of G4,(Vikram, Yuvika, Manisha and Akshay).They chance upon certain unexpected events during their vacation of 2009 which inturn force them to fight against the rotten system.In this fight for justice,they are also joined by the eminent journalist ,Varsha Dutt, a character modeled on the high profile NDTV journo,Barkha Dutt.It is quite ironical that the book has come out at a time when even Barkha herself is under the scanner for her alleged association with the corporate lobbyist,Niira Radia.The narrative flips back and forth between the India of 2009 and that of 2030. 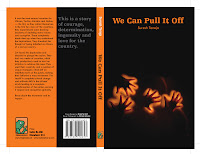 Debutant writer Suresh Taneja deserves accolades for having chosen corruption as the subject of his first book.WPTO is an honest and sincere attempt which manages to make a lasting impact on it's readers.The best thing that I liked about the book was the description of India of 2030,which had become a super power .
The plot- The biggest strength of this book is it's plot and the concept which it tries to convey.Some of the statements which it makes ('Corruption in the government sector can be attributed to the widespread economic disparity between the public and the private sector';'We don't want to be labelled as the citizens of a corrupt country')are hardhitting and needs to be pondered on.The concept of 'Corruption density index' was something which i liked very much.There are references to 'The satyam' and 'the cash for vote' scandals in the book which ifound quite interesting.But the abduction of Varsha Butt episode was outright childish and could have been easily done away with.
The Characters- There are too many characters but sadly none of them have been etched out well.The adults in the book often behave as if they are just out of school and mostly mouth cheesy dialogues.For instance,this is what a character says about one of her childhood friends-"wow! she is a combination of beauty and brains?".All the characters have been portrayed in a positive manner and for the same reason some of them lacked believability.
The writing-  Probably with the intention of getting a wider readership,the author has kept the language as simple as possible.But the language is so plain at times that I often wondered whether i was reading a book that is actually meant for young adults.Certain phrases get repeated again and again which hampers the free flow of the narrative.For instance,the phrase 'it's only the tip of the iceberg' comes every ten pages or so.A couple of grammatical errors have also crept in which can adversely affect the commercial prospects of the book.'We can pull it off' is that rare book which is brilliantly conceptualised but ends up as an average fare due to lousy characterisation and bland writing.
On the whole Suresh Taneja makes a decent debut with 'We can pull it off' and hope he comes up with another interesting issue based book in the near future.Rating-2.45/5
(The author is a C.A. by profession and is employed in a large listed companyas it's chief financial officer.This is his first completed work as an author.He can be contacted at taneja_suresh@hotmail.com)