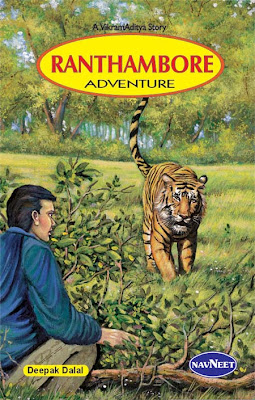 When schoolboy Aditya attempts to lay his hands on the diary of a ruthless tiger poacher, little does he know the sequence of events his actions will trigger. His ill-fated endeavour plunges Vikram and their school friend Aarti into a thrilling adventure that climaxes at the magnificent game park of Ranthambore.

Ranthambore Adventure also narrates the story of the tiger Genghis. Brimming with tiger lore, it traces the moments of Genghis’ life from his birth as a fluffy, helpless ball of fur to his emergence as a proud and powerful predator. But vicious, greedy humans infiltrate his kingdom, seeking his skin and bones.

Alternating between the adventures of school children and the enthralling tale of a tiger family, Ranthambore Adventure is a story that focuses on the Indian tiger and its grim struggle for survival.

The tiger dropped his screaming victim to the ground. On three legs the animal jumped forward. The man’s gun fell from his nerveless hands. He turned and ran. His feet tore across the forest floor. The tiger halted, making no effort to follow the fleeing human. Whimpering sounds from behind reminded the tiger that another human remained.

He turned. The renewed attention of the tiger silenced the man with the spear. The tiger’s flaming eyes locked with his. The man frothed at the mouth. His body shook violently. He saw the pain and the anger in the tiger’s eyes. He had destroyed its leg. Now…he was at the animal’s mercy. The man shut his eyes, unable to stand the animal’s accusing glare.

With tightly screwed eyes he prayed, he begged the tiger to forgive him, he promised never to lay a trap ever again. The man babbled hysterically, refusing to open his eyes. Time passed. A gentle shower of rain fell on his upturned face. The man blinked. He looked fearfully about him. He searched for the tiger. There was no sign of the wounded animal.

Ranthambore Adventure by Dalal is the extraordinary tale of a tiger, Genghis, who was born in the game park and has grown to be an awesome, majestic predator. The most incredible element of the story is the depiction of life as seen through the eyes of a tiger. The writer has nearly humanized Genghis, such that one cannot help but relate to the emotions of the animal. This aspect of the story is just as interesting as the escapades of Vikram, Aditya and Aarti.

Although it is ultimately a VikramAditya story, Aarti is the one who steals the limelight. Aditya’s heroics, which sometimes border on the foolish, land him in grave danger; he somehow manages to get hold of the diary of a poacher who is the head of an organized gang and accounts for seventy per cent of tiger killings in the country. When Aarti arrives at his house the next day, she finds the house in a mess, with obvious signs of struggle- and Aditya missing.

As she gradually finds out that her friend has been kidnapped, Aarti embarks on a dangerous journey to rescue him, which leads her all the way to Rajasthan. The best part is, all the characters have their own flaws and make mistakes- which is one of the many things that make the story so authentic. Everything that happens in the novel is not just lifelike, but completely possible- nothing in the story seems melodramatic. The climax is delightful, with the stories that ran simultaneously finally amalgamating and Vikram emerging as a hero without doing anything ridiculously filmy. Dalal has penned down a story that is as entertaining as it is didactic; it’s an adventure like no other.