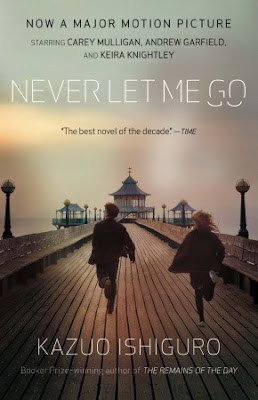 NEVER LET ME GO
AUTHOR: Kazuo Ishiguro
GENRE: Science-Fiction
SYNOPSIS:
In one of the most acclaimed novels of recent years, Kazuo Ishigaro imagines the lives of a group of students growing up in a darkly skewed version of contemporary England. Narrated by Kathy, now thirty-one, Never Let Me Go dramatizes her attempts to come to terms with her childhood at the seemingly idyllic Halisham School and with the fate that has always awaited her and her closest friends in the wider world. A story of love, friendship and memory, Never Let Me Go is charged throughout with a sense of the fragility of life.
EXCERPT:
"What I think", said Tommy slowly, "is this. Suppose its true what the veterans were saying. Suppose some special arrangement has been made for Halisham students. Suppose two people say they are truly in love and they want extra time together. Then you see Kath, there has to be a way to judge, and see if they are telling the truth. That they aren't just saying they are in love, just to defer their donations. Or they think its love but its really just a sex thing. Or a crush. But the point is whoever decides they need something to go on"
I nodded slowly. "So that's why they took away our art…"
"It could be.. Suppose two people come to Madame saying they are in love, she could find the art they have done over the years. She can see if they match. She said our art reveals our soul. She could decide what's a really good match and what's just a stupid crush"
Chandana says:
The children of Hailsham House are afraid of the woods. In the days when their guardians were much stricter, the school myth goes, a boy's body was found there with its hands and feet removed. Despite the incessant rumors, Hailsham children seem to have a nice life. The school places considerable emphasis on self-expression through art and, especially, on staying healthy. There are frequent, exhaustive medical check-ups. Smoking is a real crime, because of the way it can damage your body.
Yet despite the care lavished on them, their world has a puzzlingly second-hand feel. Everything they own is junk. Sometimes you get the feeling they're being taken care of on the cheap. In fact, they are; and their fear of the woods reflects, in a distorted but pretty accurate way, their fate. They're organ donors, cloned to be broken up piece by piece and used as spares. The purpose of Hailsham is to prepare them for their future - to help instill in them feelings of self-repression and denial that will keep them steady and dependable from one donation to the next.
Never Let Me Go is the story of Kathy and Tommy and Ruth, and of the love-triangle they begin at Hailsham. Ruth is the controlling one, Tommy is the one who used to find it hard to keep his temper: they hope that love will save them. They've heard that love or art, or both - will get you a deferral (Couples who are deeply in love will be allowed to live together for a while like a "normal couple" before they begin their donations). Kathy - well, Kathy is a carer by nature as well as profession: she watches her friends break themselves against the inevitable, but never lets them go. After Hailsham, they grow from puzzled children to confused young adults. They live in a prolonged limbo, waiting for the call to donate. They're free to wander. They learn to drive, roam Britain looking for their "possibles" - the real human beings they might have been cloned from.
Although this is science-fiction the actual 'science of cloning' is no where discussed. How exactly are the clones created? How are they kept alive after they start donating? How do they survive their third, fourth and fifth donations? The author is more interested in the emotional world of the clones. This extraordinary and, in the end, rather frighteningly clever novel isn't about cloning, or being a clone, at all. Its about three friends and the simple hopes that they have. The title of Never Let Me Go is taken from Kathy's favorite song, by make-believe folk singer Judy Bridgewater.  Kathy listens to the song while dancing and holding a pillow that she imagines to be a baby.  It presents a very sad image, for she can never have a real baby.  Moreover, she has never been held as a child, never had a mother she could ask not to let her go.  Though she soldiers on, tending to her dying fellows without complaint, Kathy's silent dance betrays how greatly she is in need of tenderness.  Aren't we all?
PRICE: INR 523/- (Flipkart Price)
OTHER INFO : Turned into a movie in 2010
PAGES: 282
RATING: 3.5/5