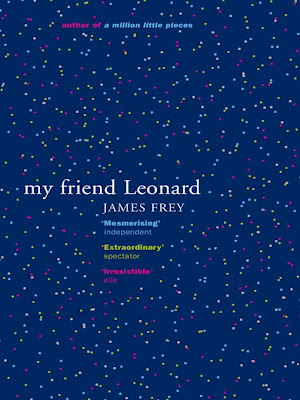 GENRE - Semi-fictional Memoir
AUTHOR - James Frey
Best Sellers - Million Little Pieces
SYNOPSIS -
My friend Leonard is the story of an extraordinary friendship formed in the most unlikely circumstances.
While in rehab James Frey finds a father figure in Leonard, a shady mafia boss. When Loenard returns to his dubious, prosperous life in the criminal underworld of Las Vegas, he promises James his support on the outside. Tragedy strikes the day James is released from jail and his world seems set to implode. Unsure where to turn, he calls Leonard. Paradoxically, it is in Leonard's lawless underworld that James discovers the courage and humanity needed to rebuild his life.
EXCERPT -
Would you mind coming back to my office?
Why?
I need to talk to you. I'd prefer to do it in private.
Where's Lilly?
Why don't you come to my office?
I want to see Lilly Tom.
Please, James.
I'm not going back to your office Tom. Just tell me where the fuck Lilly is.
He looks at the floor, takes a deep breath. He looks up at me.
Before I tell you, I just want you to know that Lilly loved you very much. She talked about you all the time and….
He looks at me. He doesn't speak. His eyes are wet.
What the fuck is going on here?
He looks at me, bites his lip, takes a deep breath. My heart pounding.
Lilly.
His voice breaks.
Lilly.
His voice breaks again.
Lilly passed away this morning.
I stare at him. I am holding her roses.
What? My heart pounding.
Lilly died this morning.
My heart pounding. What happened?
Pounding.
She took her own life.
I stare at him.
My heart, my heart, my heart.
He stares at me, speaks.
I'm so sorry. I'm so so sorry
Her flowers slip from my hand. What happened?
My heart.
We don't know. Her grandmother had just died. She was very shaken. We found her hanging from the shower faucet. She dint leave a note
I turn around. I walk out of the house.
My heart.
My heart.
My heart.
Chandana Speaks -
So the second book, the sequel to 'Million little pieces' is just as captivating and touching. By now you know that Lilly has died. Don't worry, I haven't given away the story! This is just the beginning. At the end of the previous book we get to know that James was going to spend three months in Ohio County Jail, finish his sentence and then join Lilly, who was going to be at a halfway house until then. As soon as he is out he rushes to meet Lilly but finds out that she has died. Desperate, James goes to a liquor store and buys the cheapest bottle of wine with the intention of drinking it. He spends the night in his car and does not drink the alcohol. James asks Leonard for thirty thousand dollars, which he uses to bury Lilly and her grandmother. Leonard had told James while they were in the treatment center that he would look out for James as though he were his father. He gives the money to James on two conditions: 1) James must agree to tell Leonard later what he did with the money, and 2) if James does decide to drink the bottle of wine (which he still keeps in his apartment), he must agree to call Leonard beforehand. At the end of the story, Leonard goes into hiding and James does not hear from him for eighteen months. Finally, Leonard meets with James in San Francisco and informs James that he is dying from AIDS. Leonard takes his own life by overdosing on pain medications.
Yes this books starts from the bottom, slowly climbs up, gives you hope, and then spirals down and smacks your head on the concrete floor.
When I read James Frey's Million little pieces, I though it was the most intense book I had read in recent times. But this one is even more intense. Frey is unbelievably stubborn, which for some reason makes him very attractive and appealing! He transforms his traumatic 24 year old life into something very raw, emotional and human. He struggles, he is afraid of himself, hates his fears, suffers, but never gives up. Especially since he knows that giving up will mean death for him. Leonard plays a major part in Jame's life. He has his own issues but is a brilliant father figure + friend.
This book is brilliant. DONOT read it without reading 'Million little pieces' first.
Pages - 375
Price - INR 304/- (Flipkart price)
Rating - 4/5
Posted by Chandana at December 04, 2011
Email ThisBlogThis!Share to TwitterShare to FacebookShare to Pinterest
Labels: Chandana, James Frey, Memoir, my friend leonard