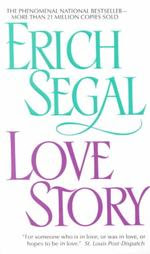 OTHER WORKS: Oliver’s Story; Roman Laughter: The Comedy of Plautus.

1st PUBLISHED: Love Story is a 1970 romance novel by American writer Erich Segal. The book's origins were in that of a screenplay Segal wrote and was subsequently approved for production by Paramount Pictures. Paramount requested that Segal adapt the story into novel form as a preview of sorts for the film. The novel was released on February 14, 1970, Valentine's Day.

He is Oliver, a rich jock from a stuffy WASP family on his way to a Harvard degree and a career in law.

She is Jenny, a wisecracking beauty studying music at Radcliffe.

Opposites in every way, Oliver and Jenny immediately attract, sharing a love that defies everything…yet will end soon.

We spoke in whispers.

“Jen…what would you say if I told you…”

I hesitated. She waited.

There was a pause. Then she answered very softly.

“I would say…you were full of shit.”

Oliver Barrett IV, who belongs to a rich, honorable and uptight family, and Jennifer Cavalleri, an intelligent, working class student of music meet at the Radcliffe library, and gradually fall in love. After passing out from college, the two lovebirds decide to marry against the wishes of Oliver's father, who consequently disowns his son.

Financially unstable, the couple strives to make ends meet. However, Oliver soon graduates from Harvard and he takes a position at a respectable New York law firm. With the improvement in their living conditions, Jennifer and Oliver decide to have a child. When they fail, the two of them decide to consult a doctor- and when they learn the truth about Jennifer, things fall apart.

While it’s a novel that has come to epitomize love, it might or might not trigger the usual reaction in every reader. I, for one, feel that it is very touching, yet I found the kind of problems that the young couple had to endure even before the tragedy, and the sad ending, somewhat upsetting. Nevertheless, it is a beautiful story… about true love, and the imprint it leaves on our hearts for ever.