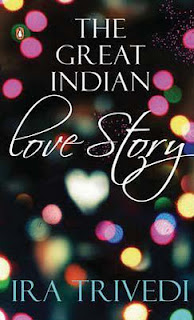 Ira Trivedi's 'The Great Indian Love Story' tries to explore the darker side of Delhi and it's socialite class.Though her intention to tell a bold and provocative tale on the lives of rich and the mighty is noteworthy it's treatment is so bland that the story loses its track right after the first few chapters itself.The characters appear as if they are sleep walking through a Madhur Bhandarkar movie with almost everyone sleeping around with everyone else and there is too much talk about drugs,sex and lacy underwears!
The story: Though the story is narrated by Riya,a U.S. educated twenty something girl who befriends Sereena Sharma at a high end Delhi gym,'The Great Indian Love Story' is more of a story of Sereena and her sexual escapades.Sereena herself is having a troubled life,her father has died recently and his mother has happily married a guy who is half her age.There is also a sub plot involving Parmeet(Sereena's mother) and her extramarital affairs.The story goes and on with nothing really happening in the narrative except Sereena(who also gets pregnant in between) and her mother having sex with multiple partners!
The writing: The language is plain and quite simple.Ira has done away with long descriptions and un necessary detailing.But the basic problem with her writing is that though there are only a few characters in this book none of them have been etched out well and as a result the reader is not able to empathise with any of them.Neither has she justified the weird behaviour of Sereena or her various boyfriends. The character of S.P.Sharma also seems half baked.The pacing of the book is also a major drawback.As i said before ,a lot has been written(that too in a disspirited,un interesting manner) on the protagonists' sexual adventures which just turns you off.The saddest part is that though the book calls itself a 'love story',there is not even a trace of true love between any of the characters here!
The climax: This book has got the weakest climax among the books which i have read recently.Though it depicts the tragic fate of Sereena and her friend Amar khanna it neither touches nor shocks the reader.It only serves to remind you that you have come to the end of an un inspiring, wannabe 'society tale'.
Verdict: Stay away from this trash!Rating -1/10(wonder why Penguin India is publishing trash like this!)
Posted by nikhimenon at December 03, 2011
Email ThisBlogThis!Share to TwitterShare to FacebookShare to Pinterest
Labels: chick lit, Ira Trivedi, legal thriller, nikhimenon