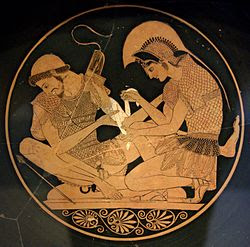 1st PUBLISHED: this revised translation was first published in 2003

‘Look at me. I am the son of a great man. A goddess was my mother. Yet death and inexorable destiny are waiting for me.’

One of the foremost achievements in Western literature, Homer’s Iliad tells the story of the darkest episode of the Trojan War. At its centre is Achilles, the greatest warrior-champion of the Greeks, his refusal to fight after being humiliated by his leader Agamemnon, and the disastrous consequences of this decision.

Interwoven with this tragic sequence of events are powerfully moving descriptions of the ebb and flow of battle, of the domestic world inside Troy’s besieged city of Ilium and of the conflicts between the gods on Olympus as they argue over the fate of the mortals.

Andromache came to meet him, and her waiting-woman carried the little boy in her arms, their baby son and Hector’s darling, lovely as a star, whom Hector called Scamandrius, but everyone else Astyanax, ‘Town-lord,’ because his father was the one defense of Ilium.

Hector looked at his son and smiled, but said nothing. Andromache, bursting into tears, went up to him, put her hand in his and said:
‘Hector, you are possessed! This determination of yours will be the death of you. You have no pity on your little boy or your luckless wife who will soon be your widow, when the Greeks kill you in a massed attack. And when I lose you, I might as well be dead. There will be no comfort left when you have met your end; nothing but grief.’

‘…I beg you, don’t distress yourself too much. No one is going to send me down to Hades before my time, though death itself, I think, is something no man, coward or hero, can escape, once he has come into this world.’

An epic poem that will leave you awestruck, The Iliad deals with diverse facets of human existence within the scope of a few days out of a ten year war. The poem glorifies the life of a warrior, and yet makes vivid the destruction that war wrecks on warrior brotherhoods and households.

The wrath of the swift footed, God-like Achilles drives the action of the epic. Agamemnon, the leader of the Greek force, has been given as booty the daughter of a local priest of Apollo. When he is compelled to return her as a consequence of Apollo’s plague, he becomes infuriated and demands repayment. After an awful quarrel with Achilles, he decides to take Briseis, Achilles’ prize, stimulating Achilles and his dearest friend Patroclus to walk out of the war.

When the Greeks begin to lose, however, Agamemnon relents and agrees to offer compensation. But Achilles, by then, feels that no compensation in the world can equal the worth of a man’s life and desires Agamemnon to ‘pay back the whole heart rending insult.’ While the consequences of his refusal to rejoin the war are terrible for the Greeks, they are catastrophic for Achilles. When the Trojan Hector kills Patroclus, he storms back into the battle to take revenge- despite knowing that this will ensure his own untimely death. Achilles is a man whose life is now committed to the death of one man and the mourning of another.

With a stunningly picturesque use of the simile, Homer introduces the element of peace into this martial saga. The interaction between Achilles and Hector’s father Priam is heart rending; it shows that there is really is more to life than vengeance and more to manhood than the massacre of men.