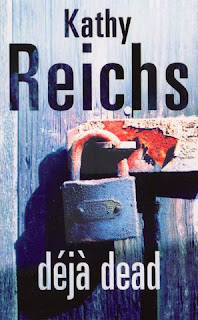 Other works : Bones to Ashes


Synopsis: In the year since Dr. Temperance Brennan left behind a shaky marriage in North Carolina, work has often preempted her weekend plans to explore Quebec. But when an unidentified female corpse is discovered meticulously dismembered and stashed in garbage bags, Tempe detects an alarming pattern within the grisly handiwork -- and her professional detachment gives way to a harrowing search for a killer in the city's winding streets. With little help from the police, Tempe calls on her expertise, honed in the isolated intensity of the autopsy suite, to investigate on her own. But her determined chase is about to place those closest to her -- her best friend and her daughter -- in mortal danger....


With a stab of pain, I’d noticed that her toenails were painted a soft pink. The intimacy of that simple act had caused me such an ache that I wanted to cover her, to scream at all of them to leave her alone. Instead, I’d stood and watched, waiting for my turn to trespass.
I could still close my eyes and see the jagged edges of the lacerations on her scalp, evidence of repeated blows with a blunt object. I could recall in minute detail the bruises on her neck. I could visualize the petechial hemorrhages in her eyes, tiny spots left by the bursting of small blood vessels. Caused by tremendous pressure on the jugular vessels, they are the classic sign of strangulation.
My gut had recoiled as I’d wondered what else had happened to her, this woman-child so carefully composed and nurtured by peanut butter, Scout leaders, summer camps, and Sunday schools. I’d grieved for the years she wouldn’t be allowed to live, for the proms she’d never attend, and the beers she’d never sneak. We think we are a civilized tribe, we North Americans in the last decade of the second millennium. We’d promised her three score years and ten. We’d allowed her but sixteen.

Nimue Says: This is the first book in the Brennan series. I read "bones to Ashes" last month and I liked it enough to search for another Brennan book. but something inside me told me to start with the first one. and I am glad I did that. This is the book that defines Tempe. Even if the narration gets a bit long , or you get troubled with the French added to the dialogues. you still can not stop turning pages. Brennan as described in the book is much different personally from the one portrayed in the TV series "bones" and frankly, I like this one more. This Tempe is as focussed and a tough nut at work as much she is emotional about people around her. She isn't too clinically accurate as the TV one but as vocal about her ideas.


This book starts with discovery of a pile of bones in a sack. The head and limbs are separated and that is not the only gruesome thing about it. As Tempe works on the bones , trying to help with identification , she can not help notice similarities with anoher case of the past. Initially no one wants toa dmit the connection and that leads her to go on with the investigation all alone - not a wise thing but surely brave on her part. The meticulous way Kathy ties each of the cases together - all in past , the first one discovered and the future one is a pleasure to read. The book keeps getting better and better with each day , so does Brennan's life as the guy behimd all the killings begins stalking her and reaches to her best friend for sending out his message.Also the end is worth all the pages you read before the final showdown ! The complete picture surely amazes you as much impresses you, considering this was Kathy's first Brennan book.
A totally must read fr all fans  of Bones !


Brennan  and Ryan do not share much chemistry in this one but sure there are glimpses of theeir professional bond and the desire for justice.