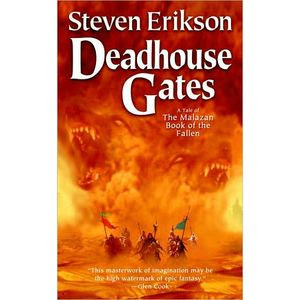 Book 2 of 'the Malazan Book of the Fallen'

BEST-SELLERS - Gardens of the Moon

SYNOPSIS - In the Holy Desert Raraku, the seer Sha'ik and her followers prepare for the long prophesied uprising named the Whirlwind. Enslaved in the Ottaral mines, Felisin, youngest scion of the disgraced House of Paran, dreams of freedom and vows revenge, while the outlawed Bridgeburners Fiddler and Kalam conspire to rid the world of Empress Larseen (although it seems the gods would, as always, have it otherwise). And as two ancient warriors - bearers of a devastating secret - enter this blighted land. so an untried commander of the Malaz 7th Army leads his war-weary troops in a last, valiant running battle to save the lives of thirty thousand refugees.

EXCERPT - Fiddler found himself starting out of a vague, floating trance. He shook his head, rubbed his face and glanced at the others, only to see they were reacting in similar ways - as if they had all been pulled into a subtle, seductive sorcery. Fiddler released a shaky breath. 'Can there be magic in mere words?' he asked to no-one in particular. Icarium answered. 'Magic powerful enough to drive gods to their needs, soldier.' 'We have to get out of here,' Crokus muttered. This time everyone nodded agreement.

FL SPEAK - [contains spoilers]
The Bridgeburners are back! Though not everyone that I wanted to see. Only Fiddler and Kalam, together with the Crokus and Apsalar have returned in this sequel. And the tale takes a whole new direction. You won't find Anomander Rake or any of the Ascendants except for Cotillion and Shadowthrone. Yet, Steven Erikson creates a gripping continuation with a whole new set of characters. Felisin, the youngest scion of the House of Paran, is sent to the Ottaral mines as a slave by her elder sister, Tavore who is now the Adjunct to Empress Larseen. This was an act to show the Empress that the House of Paran was behind the Empress even though their eldest son joined the outlawed Bridgeburners. Kalam and Fiddler plan their way back to the Malazan empire to assassinate her for crimes against the now-dead Emperor. Little do they realize that they are mere tools in a game of much higher consequences. Felisin, Duiker and Baudin escape from the mines before the Seven Cities rise up in an uprising against the Malazan. As the Sha'ik raises the whirlwind, which Kalam helped knowingly, one new Fist of the Empire, Coltaine, led his troops into battles that no one thought would survive. As the Malazan refugees throng into Coltaine's camp and they make their way across the entire desert to the city of Aren, six out of the seven cities rise up against him. Dogged and chased by enemies four times their number, the Malazan army led by Coltaine fights every battle with cunning wits and defiance. In the end, treachery among their own leads to their downfall as Coltaine and his troops fall to the enemy five hundred paces before the protected city of Aren after saving thirty thousand refugees. This has to be one of the most heart-wrenching moments of the tale when Coltaine falls for the final time as his superiors watch from nearby without sending a single help. As Kalam makes his way to the Empress and Fiddler and Co. travel with Icarium and Mappo to the ancient house of Azath through the warrens, Felisin finds herself reborn and ready to deliver vengeance on her sister Tavore and the Malazans. What follows is war, magic and betrayal at the highest levels. A stunning continuation. I hope Whiskeyjack and the Bridgeburners return in the next book. I am also dying to see the reborn mage, Tattersail back. My Rating - 4 stars