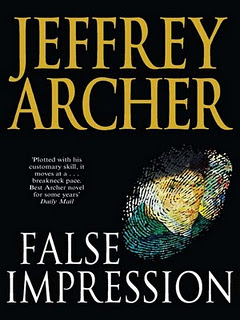 FALSE IMPRESSION: Fiction Novel (Criminal/Thriller)
AUTHOR: Jeffrey Archer
BEST SELLERS: Prison Diaries (Non-fiction), Not a Penny More Not a Penny Less, Only Time Will Tell, Kane and Abel Series and Many others.
SYNOPSIS (From Book Cover):
Why was an elegant lady Brutally Murdered the night before 9/11?
Why was a successful New York banker not surprised to receive A Woman's Left Ear in the mail?
Why did a young woman with a brilliant career steal an Impressionist Painting?
Why was an honors graduate working as a temporary secretary after Inheriting a Fortune?
Why was a Senior FBI Agent trying to work out the connection between these apparently innocent individuals?
A breathtaking journey of twists and turns from New York to London, from Bucharest and on to Tokyo, ends up in a sleepy English village where the mystery surrounding Van Gogh's last painting will finally be resolved.
EXCERPT:
"Victoria thought she heard the bedroom door open. She wondered which of her servants would have considered entering the room without knocking.
By the time Victoria had turned to find out who it was, she was already standing by her side.
Victoria stared up at a woman she had never seen before. She was young, slim, and even shorter than Victoria. She smiled sweetly, which made her appear vulnerable. Victoria returned her smile, and then noticed she was carrying a kitchen knife in her right hand.
“Who—” began Victoria as a hand shot out, grabbed her by the hair, and snapped her head back against the chair. Victoria felt the thin, razor-sharp blade as it touched the skin of her neck. In one swift movement the knife sliced open her throat as if she were a lamb being sent to slaughter.
Moments before Victoria died, the young woman cut off her left ear"
MSM Speaks: Now this is what I call writing. Crisp, breakneck speed, keeps you on the edge and you can swear you cannot get up without finishing it. Jeffrey Archer's knowledge of the art world and the dark underworld that follows the suit comes forth in this book. The quality of a true writer is to take up the lives of the characters, spin parallel stories and bring them together, seamlessly. The book follows the life of a young corporate lady, Anna Petrescue, who works for Fenston Finance, one of the roaring investment banks, that does not let go off its 'prized' employees easily. Anna comes to know of actual workings of the bank and wants to withdraw. But she is one of the most intelligent employees who has an eye for art work - real or imitation. Will she be allowed to leave so easily? And Bryce Fenston wants to own Van Gogh's self portrait of Bandaged left ear, for which Anna is the best bait. Series of events - death of Lady Victoria, Fenston's grand customer - also the owner of Van Gogh, 9/11 attack, escape of a renowned criminal Krantz, who is in good books of Fenston and Anna's run for life leave the reader gasping for more.
In all this mess, involved, is a Senior FBI Agent, Jack Delany, who is pursuing Anna hotly to determine whether she is actually innocent or a mastermind behind all these events. Oh! Lovely pursuit. Archer writes beautifully, about recognizing and ducking a stalker on your heels. The confusion of the FBI Agent leads the reader  from New York to London to Bucharest and back. On the other hand, Anna Petrescue is running out of time, so with the help of her best friend and Fenston's secretary, will she be able to save Van Gogh's Self-portrait and her own life, with those of others - it's worth a read to find out.

In all, Archer keeps to his legacy of predictable but enormously thrilling and on-the-edge style which keeps you coming back for more. And yes, MSM loves it!