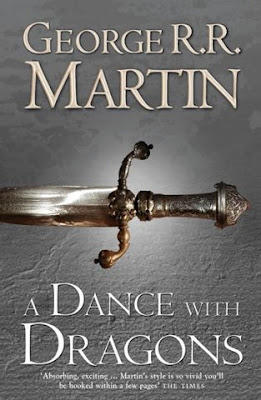 A Dance with Dragons

SYNOPSIS - The future of the Seven Kingdoms hangs in balance.

In the east, Daenerys, last scion of House Targaryen, her dragons grown to terrifying maturity, rules as queen of a city, built on dust and death, beset by enemies.

Now that her whereabouts are known, many are seeking Daenerys and her dragons. Among them the dwarf, Tyrion Lannister, who has escaped King's Landing with a price on his head, wrongfully condemned to death for the murder of his nephew, King Joffrey. But not before killing his hated father, Lord Tywin.

To the north lies the great wall of ice and snow - a structure only as strong as those guarding it. Eddard Stark's bastard son Jon Snow has been elected the 998th Lord Commander of the Night's Watch, but he has enemies both in the Watch and beyond the Wall, where the wildling armies are massing for an assault.

On all sides bitter conflicts are re-igniting, played out by a grand cast of outlaws and priests, soldiers and skinchangers, soldiers and slaves. The tides of destiny will inevitably lead to the greatest dance of all.....

EXCERPT - "I know what i swore." Jon said the words. "I am the sword in the darkness. I am the watcher on the walls. I am the fire that burns against the cold, the light that brings the dawn, the horn that wakes the sleepers, the shield that guards the realm of men"

FL Speak - The best book of the series. EVER!!! This is one book you just cannot put down! All the characters that you loved and missed in the last book is back! Arya, Jon Snow, Tyrion, Stannis and Daenerys. They are back and they raise hell!

Lets start with Stannis. He is at the wall where he defeats the wildlings. Stannis supposedly kills Mance Ryder for being a deserter and his crimes against the realm. Tyrion is on the way to the islands under the protection of the Spider. As always Tyrion is always the best character though I am starting to love Jon Snow more. The surprise of the decade came when Aegon is introduced. Yes, the heir of the Targaryen is alive and he seeks out his aunt, Daenerys. So does Tyrion as he launches into his anti-Lannister mode.

The kingdom of Dorne is in the search of Dany as well. The young prince Quentyn sails to Mereen in hopes of marrying Dany and stand against King's Landing. What starts as hope, ends his disaster when he is burnt alive by one of Dany's dragons. Jon Snow tries to keep the men of the Watch together as he lets the free folk into the realm and recruits them into the Watch to face a common foe. Dany on the other hand is busy maintaining the fragile peace. And oh she marries a loser. I don't wanna remember his name.

The bastard of Bolton is set to marry the fake Arya the Lannisters has provided. And Stannis marches to Winterfell to crash that wedding and defeat them. Little does he know about the dreaded winter of the North. The Iron Throne has proclaimed a king of their own and he orders his brother Victarian Greyjoy to seek out Daenerys as well. Looks like half the characters want to marry her while the other half are blissfully ignorant even of her existence. Theon finally manages to free the tortures of Ramsay Bolton only to be captured by the Men of the Watch and presented to Stannis jst beyond the gates of Winterfell. The Starks are as usual, lost to everyone. The book ends with Jon Snow being stabbed by his trusted brothers and losing consciousness. I swear i will hunt down and kill George R.R Martin and stab him myself if he kills him!!!

Overall, a brilliant piece of writing. I don't want it to get over. 2 more books left and i pray and pray that the Starks survive.