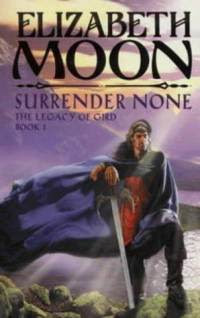 Book 1 of 'The Legacy of Gird'

SYNOPSIS - Poverty, fear and anger have shaped Gird, as he struggled to survive under an opressive aristocracy of mageborn magic-wielders. His innate hunger for justice and love for 'his' people have taken him from humble beginnings to leadership of a peasant army. Where reason has failed, it seems the only way to end tyranny is rebellion, with perhaps some help from the gods. But Gird's fondness for drink threatens his mission and his life, as his strengths are tempered with weakness.

EXCERPT - He had not intended this kind of entrance, or a display of the other things he'd been teaching his men, but this was a chance he could not overlook.

'Aruk!' he said. Behind him twenty-four sticks came up, to be held stiffly in front of each men. Gird took a step forward, clearing the necessary space, and said, 'Form - troop.' This was tricky; they'd only been doing it right s few days, and it looked anything but soldierly if someone forgot. Properly, it took them from a column to the parade formation in smart steps and turns, each pair coming forward and spreading to the sides. It might have been wiser to simply face the column right or left and pretend that was the same maneuver - but if this worked, it was far more impressive. He did not look around; he wanted to see how these others reacted. From the even tramp behind him, and the heavy breathing, they were doing it right. From the faces in front of him, it looked professional.

Now he turned, as neatly as he could, and looked at his troop. They had all made it into place, still with sticks held vertically before them. Now came the intersting part. He gave the commands crisply, and the sticks rotated: left, right, horizontal, vertical, all moving together in an intricate dance of wood. No one was off-count today, he was proud of them.

FL Speaks - Once in a while a book comes along which you are proud to read. This is one such book. With Gird, Elizabeth Moon has a best-seller.

This is the tale of Gird and no other. It starts with Gird, a peasant's son  who wanted to be a soldier and dreamt of fighting wars and helping the peasants against the wolves and brigands. He signed up, but after a year, when the Lord returned, he ran away from his duty after watching his Lord whip and flog a young child to death for stealing a few plums.

The desertation cost his family prestige and honor and his family was marked by the Lord forever. As he grew up to be a farmer, the Lord's injustice in his village led to the death of his brother and mother. After Gird married, he hoped the hard times were gone, but little does every wish comes your way. The rape of his daughter and the murder of his son was the last nail in his coffin and he left the village to join the rebels into the forest.

It is from here, that Gird grows into a legend. Gird turns the peasants into soldiers from the knowledge of what he learned in the first year of being a soldier. Brigands no more, these peasants live by discipline that Gird imposed. Soon people from nearby villages start flocking in to be part of the group led by Gird. Other outlaws, impressed by Gird's men, join him and the start of a growing army can be seen. But it is easier to lead an army but not so easy as to what to do after the war is won. Gird travels to the land of the Gnomes, who teaches him law and Gird vows to make the world a better place to live after the war.

It would do a grave injustice if I spilled the story out. This is a must-read book...because of the simplicity and the plethora of emotions it brings out in you. A peasant joining the rebels is believed, peasants looting guards is also believed, but a peasant turning peasants into a disciplined army is something no one could believe. And Gird does that and much more.

PRICE - $12.24 from Amazon
Posted by Freelancer at October 17, 2011
Email ThisBlogThis!Share to TwitterShare to FacebookShare to Pinterest
Labels: Elizabeth Moon, Fantasy, Freelancer, Series - The Legacy of Gird