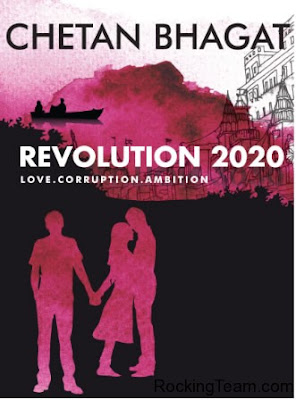 SYNOPSIS - Once upon a time, in small-town India, there lived two intelligent boys.

One wanted to use his intelligence to make money.

One wanted to use his intelligence to start a revolution.

The problem was, they both loved the same girl.

Welcome to Revolution 2020. A story about childhood friends Gopal, Raghav and Aarti who struggle to find success, love and happiness in Varanasi. However, it is not easy to attain these in an unfair society that rewards the corrupt. As Gopal gives in to the system, and Raghav fights it, who will win?

EXCERPT - Aarti and I had a deeper relationship. We saw Raghav as a friend, but not a close one.

'You will make a great air hostess', Raghav said, his tome flirtatious.

'yeah. Whatever,' Aarti said. 'Like dad is going to let me leave Varanasi. There are no airlines here. Only temples. Maybe i can be a temple hostess. Sir, please take a seat on the floor. Prayers will begin soon. Prasad will be served in your seats.'

Raghav laughed again, holding his muscular abdomen. I hate people who are naturally gifted with a flat stomach. Why couldn't god make six-packs a default standard in all males? Did we have to store fat in the silliest places?

FL Speak - And with this, Chetan Bhagat is back! Revolution 2020 was supposed to be carry-on-the-good-work writing after 2 States, which i have to admit was good. But his latest novel turned out to be a dud. A very big dissapointment.

Revolution 2020 has three main characters. Gopal, Raghav and Aarti. The author seems to have a fixation with threesomes, with 3 of his novels having 3 main characters. Anyway, its Gopal and Aarti who steals the plot away with Raghav reduced to being a spectator most of the time. The protagonist, Gopal is the anti-hero whom you will love to hate and love to love.

Varanasi. Home of our three young characters. Gopal and Raghav are friends from childhood and they meet Aarti in school when they were still kids. As time pass, Gopal and Aarti becomes the best of friends and Raghav a good friend of them both. As they reach their teens, Gopal's hormones start to act and he falls in love with Aarti. Aarti acknowlodges that she likes him too but "not like that" [*sigh* this is what happens in bollywood movies!].

Well, i guess you all can figure it out what happens after that? Hint - think Bollywood style. Yes, Aarti falls for the rich and the more hunky Raghav while Gopal, being poor and reduced to just-a-friend slowly loses his friendship. Raghav gets into IIT and Gopal goes to Kota for a year to prepare for his AIEEE once more. Now for the predictible twist. Raghav turns down a job offer at Infosys and chases his dream of being a journalist and start a Revolution to stop the rampant corruption. Gopal, fails to crack AIEEE once more, comes back home dejected. Soon, his father dies and he sells their farming land to a corrupt politician to build a college. You can't help pitying Gopal as he believes whatever he is doing, its not evil.

Aarti is being the confused bimbo. Seeing Raghav busy with his job, she secretly meets with Gopal for coffee at times to rekindle their friendship and not before long they end up sleeping with each other. Kudos Chetan Bhagat. We weren't expecting that! *smirks* Anyway, blah blah blah and as in most Bollywood potboilers, the hero grows a conscience. He sacrifices his love to bring back Raghav and Aarti together and bam! End of Story!

Seriously, i expected a lot more from Bhagat. This is a story that even my hormone-driven teenage brother can come up with in his dreams. Chetan Bhagat, whom i immensely like, is sadly living on the success of his first book. Disappointed.