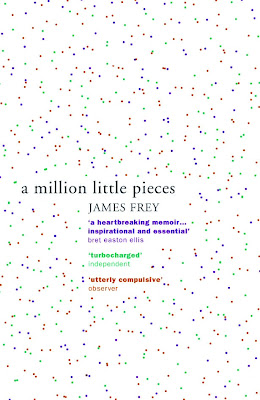 GENRE - Semi-fictional Memoir
AUTHOR - James Frey
BEST-SELLERS - A Million Little Pieces, My Friend Leonard
SYNOPSIS -
Aged just twenty-three, James Frey has destroyed his body and his mind almost beyond repair. When he enters a rehabilitation center to try to reclaim his life, he has to fight to determine what future, if any, he has. His lack of self-pity, cynicism and piety gives him an unflinching honesty - a fearless candor is that once charming and appalling, searing and darkly funny.
EXCERPT -
I look at my clothes and my clothes are covered with a colorful mixture of spit, snot, urine, vomit and blood. I reach for the call button and I find it and push it and I wait and thirty seconds later an Attendant arrives.
How can I help you?
Where am I going?
You don't know?
No.
You're going to Chicago, Sir.
How did I get here?
A Doctor and two men brought you on.
They say anything?
They talked to the Captain Sir. We were told to let you sleep.
How long till we land?
About twenty minutes
Thank you.
Although I never look up, I know she smiles and feels sorry for me. She shouldn't.
Chandana Speaks -
I refused to pick this book up the first two times, seeing that it was a memoir (which I am not really a fan of). But something made me pick it up the third time (maybe the name?) and boy! Am i glad! By the time you read one-fourth of the book you would be feverently wishing that it WAS fiction just so you can tell yourself that the pain the author was going through wasn't real.
It starts with James finding himself half-conscious, delirious, with a broken nose, covered in his own vomit and blood, en route to chicago on a plane and with no clue as to how he got on the plane. After he lands he is picked up by his parents who put him in a rehabilitation center. And from there his inspirational and courageous journey starts.
James has been an alcoholic for ten years and a crack addict for three. He is also wanted by the police in several states for different charges. In the rehab clinic he butts head with the unit supervisors when he doesn't agree with their methods. As stubborn as he is, that he's going to follow his own route to recovery, there is a certain charm to it. His agonizingly self-critical nature is something that will touch your heart. As part of his recovery he is forced to undergo a series of painful root canals without any anesthesia because even that is considered as substance abuse. The 10 page description of his root canal is something I haven't yet dared to read word to word! He copes with the pain by squeezing tennis balls until his nails crack
He also forms an unlikely friendship with Leonard(who happens to be a mafia boss). Leonard's advice to James to just "Hold on" until things get better is one of the things that helps him recover. At the end of the book he begins to care deeply for James and starts to regard him as his Son. Then there is also Lily, James's love interest. He meets Lily a fellow patient with whom he falls in love despite the strict rules against contact between Men and Women in the center. James also starts to build his almost crumbling relationship with his parents with the help of the 'Family Program'. He speaks of his 'Fury' which he thinks is the cause of all his drinking and drugs.
Another thing that hits you as soon as you start reading the book is the absence of "quotation marks". His style of writing is very unique. Its more like reading his thoughts rather than a conversation between two or more people.
All-in-all its a heartbreaking memoir. Its brutal, its candid, its a book that will make you think about family, friendship, love, death and perhaps most of all the never-say-die human spirit.
Rating - 4.5/5
PRICE - INR 295/-
Posted by Chandana at October 19, 2011
Email ThisBlogThis!Share to TwitterShare to FacebookShare to Pinterest
Labels: autobiography, Chandana, James Frey, Memoir