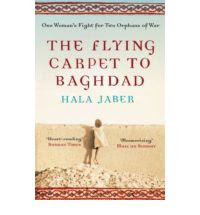 THE FLYING CARPET TO BAGHDAD

SYNOPSIS: To find a child to be the face of war- this is the task that
award-winning Sunday Times correspondent Hala Jaber faced when she arrived in Iraq in 2003. Reeling from her own unfulfilled desire for a child, it was the last assignment she would have chosen. Then she met Zahra. Three years old, lying badly burned in a hospital bed, she and her baby sister Hawra were the only survivors of the Baghdad missile strike that killed their parents and their five siblings. She ticked every box, but for Hala it was no longer about the article; she was going to save these damaged children.

A powerful tale of love, guilt and redemption, the shocking story of what happened next reveals more about the human cost of war than the news ever could.

EXCERPT: If it had not been for a strange request from my office, i would never have followed the trail that led me through a teeming, terrified city at war to the hospital where i found Zahra.

‘We need an orphan’ my boss said.
‘Not just any orphan. A special one’.

His instructions were as meticulous as they were startling. I should not settle for the first injured orphan i came across, he told me firmly. I should scan all the hospitals with paediatric wards for the special one.


ANUSHREE SAYS: As the title suggests it is a journalists journey through the arid lands of war torn Baghdad. It is not only an account of the dreadful war that rendered millions homeless and innocent children orphaned, but also the ties of human emotions. I was simply overwhelmed by the simplicity of language used and the way she has explained the pain of not bearing and
nurturing a child.

The book is mainly centered around 4 characters- the author, Zahra, Hawra and the grandmother. I liked the way the author explains the complex stream of emotions she goes through whenever she faces the helpless grandmother and the little girl Hawra, who barely understands the intensity of the situation. In a few portions the mother takes over the role of a war journalist.

The book also speaks about this young boy called Ali who is not only a survivor but an inspiration for millions of people. I personally enjoyed reading Ali’s story. Its written in an intelligent manner, though a few parts may tinker your imagination and force you to feel the pain that the boy goes through. Given that it belongs to the genre of non-fiction, a few parts are heavy and one may think that it is exaggerated. One thing that i loved about this book was that it has no specific mention of Politics. It is an honest attempt to bring out the aftermath of war and the fight that a nation and its people endure.

MY RATING: 3.5/5
Posted by Anushree at October 24, 2011
Email ThisBlogThis!Share to TwitterShare to FacebookShare to Pinterest
Labels: Anushree, Hala Jaber, non-fiction