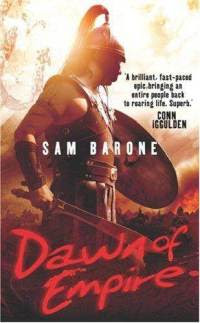 SYNOPSIS : Three thousand years before the birth of Christ. An epic conflict is about to begin. The reward for victory? Civilization. The price of defeat, a return to the dark ages.

The hopes of civilization rest on one man's shoulders: Eskkar, once a barbarian, now a warrior in charge of defending a small town which lies in the path of a vast barbarian war party. The last time the invaders came to Orak they spared no one, and the tiny candle of trade and agriculture that had begun there, the first in all of human history, was extinguished.

But Eskkar and Trella, the beautiful slave girl he has been given by the grateful townsfolk, and the raggle-taggle army he has inherited are not going to flee. They will fight against overwhelming odds with foolhardy bravery, subtle ingenuity and the last drop of their blood. On this tiny band, the lathe of history will turn: victory or darkness?

EXCERPT - A boy ran up and took the halter from Eskkar as he dismounted. Moments later, the twenty men of the reserve arrived, breathing hard from the quick run. He divided the reserve force and sent half to each tower, but he climbed the steps that led to the top of the gate. Only a few men stood atop the upper rampart and those were busy pouring water over the top of the gate, trying to keep the wood wet.

FL Speaks - The book starts with the barbarian army laying waste on a small village on the banks of the river Tigris. The army are always on the move. They are a nomadic tribe. Any village they plunder, they make sure they burn everything and rape the women and kill the weak and old. They rest, are slaves for life.

Orak, once a small village. Now a village of more than 500 people. Orak was plundered by the same barbarian army 10 years ago. After hearing of the villages' revival, the barbarian chief has directed his army once more towards the village and its riches. The nobles of the village elect Eskkar to see the defenses of the village. Even though Eskkar believed that hardly anyone could stand against the invading horde, he came up with a plan that might just save the village. Because if it is not saved, everything they worked for in the last 10 years would be turned to ashes. The village people throw themselves to the cause even though Eskkar was once a member of the same barbarian clan that is on the move against them.

Enter Trella, a slave girl with the gift of wisdom. Trella was given to Eskkar by the nobles for his pleasure. But Eskkar came to realize that she was more than just a slave. Very soon he started listening to her advice and treated her as an equal, much to the chagrin of some of the noble families. Eskkar did what he knew best. He trained and ordered man to build a huge wall behind which they can defend. And he turned almost every villager into a soldier. Everyone had to work, even the noble and richest families, because if they were late, they would be run down and burned.

Intense, fast paced action as Sam Barone brings back history to life. I couldn't find any flaws and as night parted to dawn, i finished the book feeling at peace and satisfied.