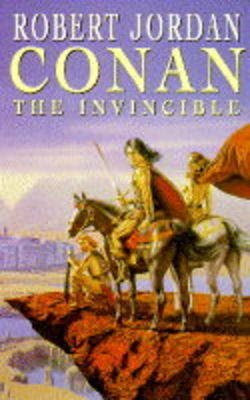 Book 1 of 'The Conan Chronicles'

AUTHOR - Robert Jordan
BEST-SELLERS - The Eye of the World, The Great Hunt, The Dragon Reborn

SYNOPSIS - Pursued by a blood crazed army, ensnared by the wily and beautiful Red Hawk, the magnificent barbarian challenges the supremely evil necromancer Amanar, and is plunged into ultimate struggle with the darkest of demon-gods, the EATER of SOULS.

EXCERPT - Conan eyed the ridge to the left of the narrow valley the bandits were traversing. There had been movement up there. Only a flicker but his keen gaze had caught it. And there had been others.

He booted his horse forward along the winding trail to where Hordo rode. Karela was well to the front, fist on one high-booted thigh, surveying the mountainous countryside as if she headed an army rather than a motley band of two score brigands, snaking out behind her.

FL Speaks - The legend of Conan is well known in the fantasy world. Films and books have been written about him by various authors. This one is by Robert Jordan.

Not quite what i expected from the man who gave the 'Wheel of Time' Saga. In Conan The Invincible, the writer creates an almost super-human character with superhuman strength. We all have heard of Conan. He is like the Thing and Hulk mashed into one...only perfected.

In this book, Conan is not yet nineteen years old and still he is the best thief in Shadizar. Because of this reputation, a necromancer recruits him for a job of stealing a few precious pendants from the Royal Palace for a lot of gold. Conan almost succeeds, but postpones his plan after failing to secure the pendants on the first night and killing a guard to save a slave. Later he realizes that someone else beat him to the job and the chase begins.

Conan rescues a girl held captive by two mercenary while on the trail of the people who stole the pendants. Little did he know that the girl he saved was the most feared bandit, Red Hawk. With the promise of gold, Conan manages to persuade her and her crew to follow him on his chase. The chase leads to the home of the most evil sorcerer where Conan must survive his own life, get the pendants, defeat the sorcerer and free the slave girl he promised. Lots of action makes this book a fun read.

Superb imagination as the outlaws face the soldiers of the King on one side and creatures from sorcery on the other. An unlikely alliance may be their only salvation. But do they follow Conan, a thief or Red Hawk, their leader or do they succumb to the tricks of the evil sorcerer? And how do they survive an even darker evil?
My Rating - 2.5 stars