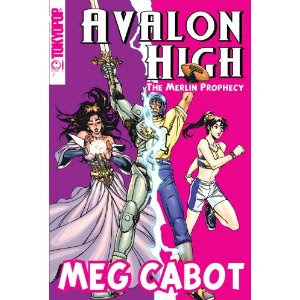 Life’s been pretty exciting for Ellie since she joined Avalon High. She is doing great at school, she’s a star of the track team- and, oh yeah, she’s dating the super hot class president, Will, who also happens to be the alleged reincarnation of King Arthur.

Ellie isn’t sure she really believes Will is a reincarnated king- and Will finds it a stretch too. But their doubts might prevent an age of enlightenment – and the Merlin Prophecy- from coming about. And whatever they believe, their lives are definitely in danger…

Presenting, a graphic novel that is actually as ridiculous as it seems to be. (No offence intended.) After reading Avalon High as a novel, I had a few expectations from its sequel…Manga style (an apparent hybrid of American and Japanese comics). And believe you me each and every one of them was dashed. Divided into three sections, this book makes you wonder why you ever picked it up in the first place.

The first chapter takes you through the story of Avalon High, the novel, so that you have some clue as to what’s going on here; although, to be quite frank, there’s nothing really going on. Based on an Arthurian legend, Avalon High: the Merlin Prophecy introduces you to Will Wagner- the reincarnated King Arthur- and Ellie Harrison, the reincarnated Lady of the Lake, his supposed protector.

While Will’s best friend Lance takes on the role of the handsome knight Sir Lancelot, Will’s ex-girlfriend Jennifer is assumed to be King Arthur’s wife Guinevere (who had allegedly fallen in love with the knight). Come in Marco, Will’s step brother. Who, according to Merlin (read: Ellie’s history teacher Mr. Morton) “couldn’t help trying to kill his half brother, any more than Mordred couldn’t help killing King Arthur”. The second part reveals the whole point of writing this sequel: the Merlin Prophecy, which states that “in order for Camelot-like peacefulness to reign once again over the planet…the reincarnation of Arthur must believe he is truly a king.’’

There’s some babble about the homecoming, by when Will must accept his fate or the world will be plunged into darkness and evil will take over. The third section ends before the action has started and leaves you partly frustrated and partly relieved. (That it’s over.) Read it if you must. It’s something you can go through if you’re stuck in class and need to keep yourself from falling asleep. (Thank heavens I only borrowed it.)