The Well of Ascension - Brandon Sanderson 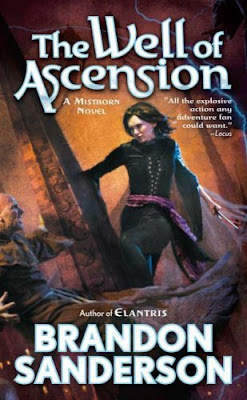 THE WELL OF ASCENSION

SYNOPSIS - They did the impossible, deposing the godlike being whose brutal rule had lasted a thousand years. Now Vin, the street urchin who has grown into the most powerful Mistborn in the land, and Elend Venture, the idealistic young nobleman who loves her, must build a healthy new society in the ashes of an empire.

They have barely begun when three separate armies attack. As the siege tightens, an ancient legend seems to offer a glimmer of hope. But even if it really exists, no one knows where to find the Well of Ascension or what manner of power it bestows.

It may be that killing the Lord Ruler was the easy part. Surviving the aftermath of his fall is going to be the real challenge.

EXCERPT - I write these words in steel, for anything not set in metal cannot be trusted.

King Elend Venture stood motionless upon the Luthadel city wall, looking at the enemy troops. Around him, ash fell from the sky in flat, lazy flakes. It wasn't the burnt white ash that one saw in dead coals; this was a deeper, harsher black ash. The Ashmounts had been particularly active lately.

Elend felt the ash dust his face and clothing, but he ignored it. In the distance, the bloody red sun was close o setting. It backlit the army that had come to take Elend's kingdom from him.
FL Speaks - Pause. I need to take a breath. Amazing!! Who would have thought of writing a gripping tale after acheiving the impossible. They managed to deal with the Final Empire. They managed to free the people and kill the Lord Ruler. They paid the ultimate price with the death of the person who made it all happen, Kelsier. And now, when peace and stability should return, chaos reign supreme.

Extraordinary writing by Sanderson. Sanderson makes it possible to even love the tyrant and yet hate him. But the Lord Ruler is now no more. And they gang realise, that maybe it was a huge mistake killing him and ending his rule. Because now a greater power, far more evil is itching to break loose. Something that the Lord Ruler contained while he was still in power. The gang elect Elend Venture as the king and he delivers his promise of freeing the people. What they didn't realise is, a King does not have the luxury of listening to every single whim of a person, no matter how much he wants them to be independent. In his quest to being a people's man, Elend forgets that the same power he gives to the common man may soon become the end of his short reign.

Book 2 starts one year after Kelsier's death and the deposing of the Lord Ruler. Kelsier's own crew mates blame the dead Kelsier for giving the skaa people a hope and then dying without giving them a direction. (I assume you have read the book or will do so soon as i do not find the logic of recapping the entire book 1 in this review) Within a year of tasting freedom, Elend's city is surrounded by 2 armies and another one, albeit inhuman, on its way. It was a mexican standoff, with neither army willing to attack the city for the fear of being attacked by the third party when they are at the weakest.

Enter Tindwl, a Terriswoman, who comes to the city to help Elend be the King the people need to see. Soon enough, people start to respect him rather than dismissing him as the one who has dreams but no leadership. Eventually even that is not enough to save his capital as the very people he freed vetoed his rule. (unloyal bastards!) Brandon introduces a new character to the tale, Zane. Zane is a Mistborn assassin sent by Elend's father to kill his son. And then he meets Vin. (The expected happened. Stupid girl started to fall for the bad mysterious villain! Man, seriously, chicks give me a headache. I try not to get emotionally attached to these stuff knowing fully well its fantasy, but can't help myself. Woman!!! Get your priorities straight!!! Stick to one guy!) I was almost shouting at the book saying ELEND ISN'T THE BAD GUY! OPEN YOUR EYES. OPEN YOUR EYES. Sigh!, i will never be a good writer.

Anyway, the ending was brilliant. Despite that mini emotional heart attack, things almost ended well. Almost. The people who were studying the works and writings of the Lord Ruler to find a clue to defeat the mists led Vin and Elend to the mother of all mistakes! Gasp! Need the final part of the trilogy now!